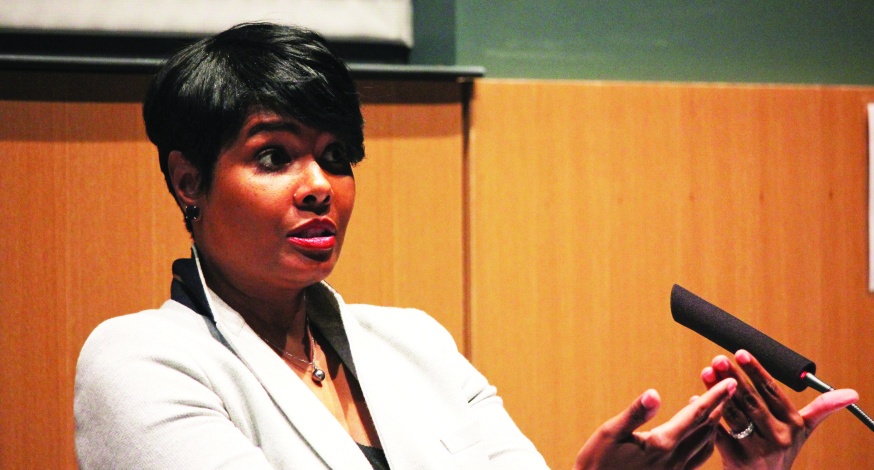 Angela Burt-Murray delivered a talk entitled “Black Voices Matter: Race and Gender in the Age of Social Media” in the Williamson College of Business Administration’s auditorium yesterday as part of the University’s Black History Month celebration.

Burt-Murray, former editor-in-chief of Essence magazine and the founder of Cocoa Media Group, opened by talking about the important events she has covered, including the aftermath of Hurricane Katrina, the spread of the HIV epidemic, the racial achievement gap and mass incarceration.

But she said the best professional experience she’s had was covering the election of President Barack Obama.

She spoke about visiting the Obama family at their house in Chicago, seeing Sasha and Malia Obama practicing piano and reflecting on the similarity between the Obamas and her own family.

“Was it really possible they could be America’s first family?” Burt-Murray asked. “Could we dare to dream?”

She then spoke about interviewing the couple in the White House, talking to Michelle about settling into their new life, what the moment meant for black women and her future plans. Talking to the President, they discussed transforming urban schools, overcoming challenges for black boys and closing the achievement gap.

“There’s never been a more exciting time to be black in America,” Burt-Murray said.

But she said racial vitriol spouted by political figures and civil rights abuses make her question whether the country is moving backwards.

“Despite the challenges and fears I have raising four black boys in a country designed to destroy them, I still have hope,” Burt-Murray said.

That hope comes from social media. She said millennials are bringing back activism, and social media is making it easier than ever before.

“Thanks to social media,” Burt-Murray said. “I’m feeling a new spirit of hope and change.”

She referenced the Black Lives Matter hashtag, created by three women, that has started a national conversation about the way communities of color are policed.

“The election of Barack Obama combined with the birth of social media launched a hotly-contested conversation about race and gender in America,” Burt-Murray said.

She asked the audience how they felt about a group of teenage girls at a high school outside of Phoenix posting a picture of themselves wearing shirts spelling the N-word to Snapchat.

One attendee said it made her shake her head, and she’s bothered by younger people that treat racism as a joke, noting that her grandfather’s house was bombed.

“I felt like some of the things my grandparents went through were trivialized,” the woman said.

She asked whether the act should follow those girls throughout the rest of their lives. Some believed it should, but one student said that is no different than allowing non-violent crimes to follow black youths into the future.

She then moved the discussion to the football team at the University of Missouri, who refused to play until the University’s president resigned.

“Does a university have a responsibility to respect the thoughts, feelings and actions of its students?” Burt-Murray asked.

“You can get more energy out of kindergarteners than you can on a college campus,” he said.

Burt-Murray noted that social media has increased transparency but questioned whether we could move beyond hashtags and start building bridges.

Many attendees claimed that money is power, and in order to affect change you need to vote with your wallet. Others claimed there is power in unity.

“Those are where the decisions are being made that will directly affect your life,” Burt-Murray said.

Burt-Murray asked why the current generation continues to struggle with problems that have plagued society since its inception.

“Your generation is the most diverse generation that this country has ever seen,” Burt-Murray said. “So why are you still seeing the same racial tensions on your college campuses?”

She brought the conversation back to social media and the power social media gives to the current generation.