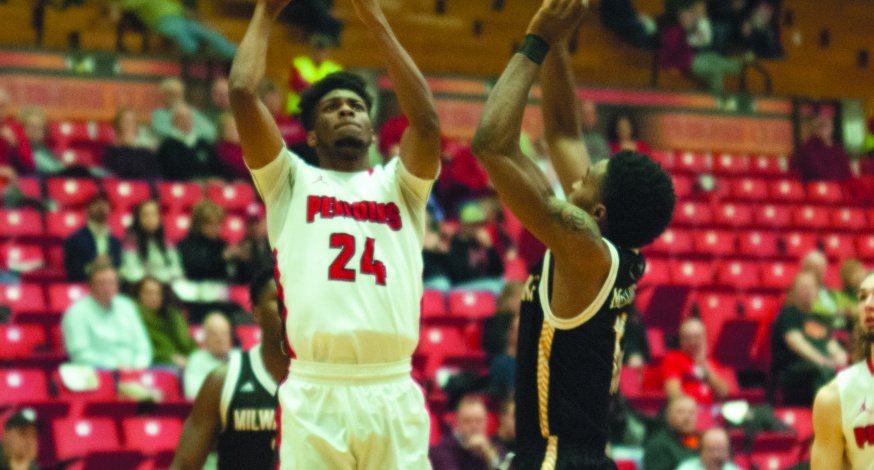 During the 2014-15 season, Cameron Morse, a Youngstown State University guard, was sitting toward the bottom of the Penguin depth chart and only played in three of the teams’ first 15 games during his freshman year.

He didn’t start seeing consistent playing time until Jan. 11, 2015, but in limited playing time, he averaged six points and one rebound per game.

This season, Morse is considered YSU’s best offensive weapon. Morse is averaging 18.1 points per game, including a 44-point game on Saturday against the University of Wisconsin-Green Bay.

“I’m very comfortable in the starting lineup. Before, Brett Frantz was starting before me but he was giving me tips. Coach was giving me confidence. Coming into the game, I had the confidence to do what I do best,” Morse said after YSU’s game against Green Bay.

He currently ranks second in the Horizon League in scoring and his 48.9 field goal percentage ranks tenth.

Morse has played the majority of the season on the Penguin bench but has started the last five games. Since entering the starting lineup, Morse has averaged 26.2 points per game.

Some of his success could be attributed to the loss of senior Bobby Hain. The senior forward suffered a broken foot during the Penguins’ 87-78 loss to Notre Dame on Dec. 21, and while YSU head coach, Jerry Slocum, doesn’t want to make any guarantees, it looks as if the Penguins’ star will not return this season.

Since Hain’s injury, Morse has been the centerpiece of the offense. The team has adopted an up-tempo offense that allows players like Morse to get the ball in the open court before the defense is back in position.

Point guard Francisco Santiago said Morse’s abilities go beyond his scoring. Morse has the ability to take over the responsibility of a point guard and run the offense depending on the defense’s strategy.

“It’s real nice because it takes the pressure off me. I know sometimes I get a little bit on the same side, and I throw it to him because I know what he’s capable of and it takes pressure off of me. On Saturday, we were getting double-teamed — he could bring it up and Cam, he could run the offense. He’s a more than willing passer but he’s capable of scoring. All five guys on defense have to be on their P’s and Q’s and that’s what opens [opportunities] up for other guys.”

Santiago said he enjoys playing with Morse because he’s a player that can create his own shot.

“He has the ability to make difficult shots. You look at guys and you say ‘oh, that’s not a really a good shot’, but for Cam it is. He’s able to get his shot off. He just needs a little bit of room and he gets it over the top, and he’s a real good shooter.