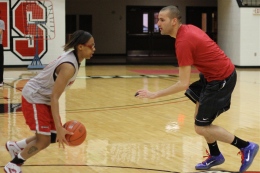 Eduardo Mateo defends Penguins guard Kenya Middlebrooks as she dribbles up court during a practice inside Beeghly Center. Photo by Dustin Livesay/The Jambar.

When assistant women’s basketball coach John Cullen sought to improve on last year’s 6-24 season, he thought of the challenges he faced while coaching boys basketball at Canfield High School for 28 years.

Cullen tracked down three male players to join the women.

They don’t suit up on game days, but they may be an integral part of the team’s success this season. Every Tuesday, Wednesday and Friday afternoon, Anthony DeFelice, Eduardo Mateo and Zach Matisi match up against the women’s basketball team at Beeghly Center, helping the women prepare for their upcoming opponents.

At Poland Seminary High School, DeFelice was a standout guard who went on to play basketball for Westminster College. Mateo played for Hickory High School in Pennsylvania, while Matisi battled in the low post for Lowellville High School.

Described by head coach Bob Boldon as “a great group of guys,” each player possesses certain skills and characteristics that intrigued the coaching staff.

“We had some criteria that we were looking for, and these guys fit that criteria,” Boldon said. “It wasn’t just whoever wants to do it. We went through a process.”

The process has produced three talented Youngstown State University students on the scout team whose basketball abilities challenge the women.

“They can do things that our players cannot do,” Boldon said. “Yet it’s things we have to guard on Thursdays and Saturdays. I think they’re a big help.”

“Their skill level is great,” she said. “They’re above to what we’re playing as far as women. They’re a lot quicker and faster, and they can jump a lot higher than what the women do.”

Mateo said he realizes what he’s able to bring to the women’s team.

“I’m not saying I’m the greatest basketball player, but I’m a lot taller than anyone else,” Mateo said. “If I wasn’t there, they wouldn’t be able to get that test of playing against someone taller. And the other two guys bring their own aspect. I’m sure the girls practicing with someone who brings these different abilities helps them out.”

Boldon said that while the Penguins run an offense distinctive to the rest of the Horizon League, he doesn’t have to waste time teaching his players an opponent’s offense they’d never use.

“Our offense is very unique,” Boldon said. “It would be a waste of time to teach our kids an offense we have to prepare for because they do things we do not. In particular, teams that ball screen, we don’t ball screen. Teams that have a low post game, we don’t throw it in the low post. Most of our play is on the perimeter.”

A typical practice begins with the scout team being taken aside and having their roles explained to them by the coaches. Each player is told exactly what kind of skills to possess and the type of tendencies to perform.

“Sometimes they’re drivers; sometimes they’re shooters. We’ll ask them to only drive left or drive right. We’ll ask them to play defense and not allow a certain player to touch the ball,” Boldon said. “One day, Anthony might be a shooter, and the next day or week, he might be the best driver. They just do a great job of doing whatever role they’re playing that week.”

That type of cooperation is why Boldon describes the guys as “fantastic to work with.” They have no problem setting their egos aside and doing whatever it takes to help out.

“They’re good guys overall,” Middlebrooks said. “They’re really here to help us out and make us better as a team, and they’re willing to do whatever it takes.”

It’s hard to measure their impact, but the team has already exceeded its win total from last year. Boldon said the guys have helped “immensely.”

“I think it’s great for our kids and has helped us be a little more successful and a little bit more prepared,” he said.

As for a taking pride in seeing improvement and success from the team, Mateo believes it is only natural.

“I obviously get happy when they win because I feel like Anthony, Zach and myself have helped them do that,” he said. “Each girl is a great basketball player, and I have a lot of respect for them … and the coaches, of course.”

Boldon says both sides are gracious and appreciative. He sees it each time DeFelice, Mateo, and Matisi volunteer their time. By NCAA rule, the guys can receive no reward other than a pair of shoes and some practice gear.

“I enjoy practicing with them. I don’t need compensation,” he said. “I just like playing basketball.”