With November right around the corner, Youngstown residents will soon say farewell to their current mayor, John McNally.

Born and raised in Youngstown, McNally grew up on the Northside and graduated from Ursuline High School in 1987. He is a husband and father of two. Previous to holding the position of mayor, he worked in other areas of the city and county.

“Coming back here as mayor was fairly easy because I had worked with most of the department heads, I knew a good chunk of the employees, still knew them when I was county commissioner, still did some things for the city. So it was a pretty smooth transition to become mayor,” he said.

During his time in office he has maintained a good relationship with Youngstown State University, according to Ron Cole, public information officer at YSU.

In 2014 McNally appointed YSU’s evening operations manager of YSU’s Kilcawley Center to the position of coordinator of Downtown Events and Citywide Special Projects.

Michael McGiffin still holds the position and said he’s had a pleasure working with the current mayor.

“He was one of the smartest and best leaders I’ve ever worked for,” McGiffin said. “I’m really proud of the work we accomplished while he was mayor.” 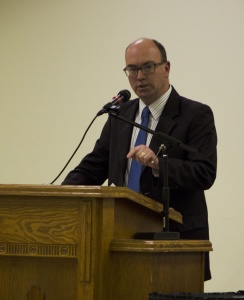 McGiffin gives credit to the mayor for many of the changes brought to the city, such as the construction throughout downtown and YSU campus as well as the new amphitheater that is on its way.

“A lot of the growth in the downtown area was due to a mayor who was willing to take some chances and think outside the box,” McGiffin said.

As for taking chances, McGiffin recalled McNally taking a big one in September 2016, when he rappelled off the roof of the Metropolitan building, the tallest building in downtown Youngstown.

McNally, along with over 70 others, participated in a fundraising event for the Beatitude House. Anyone who raised at least $1,000 was able to rappel from the 18-story building. The mayor was one of the first to take that leap.

McNally said one of the bigger accomplishments of his time as mayor has been the reforming of the infrastructure in the city. Under his administration vacant or devastated homes have come down in Youngstown.

“When we came in there were a few things we really wanted to make a dent in and the first was the quality of life in our neighborhoods and how our main corridors look,” McNally said.   “We’ve taken down in the past three years about 1,400 homes. This year so far we’ve taken 325 homes down and expect to take down at least another 110.”

In November the residents of Youngstown will vote for a new mayor. McNally said he doesn’t plan to stop working though, as he joked he will be on the hunt for a job.

When asked what his hopes are for the new mayor of Youngstown, he said there are several areas to focus on.

“I think they obviously have to pay attention to demolition, quality of life, infrastructure issues and that has to be a focus,” McNally said.

He also expressed a dire need to focus on infant mortality.

McGiffin said the work of McNally will live on past his term.

“He made a lot of the right moves that will allow the city to benefit long after he is mayor,” McGiffin said.