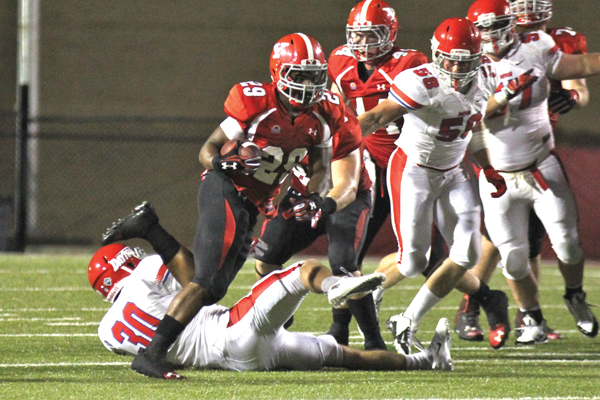 Youngstown State University’s game against Morehead State University on Saturday will mean many things to different people.
For the players and head coach Eric Wolford, it’s an opportunity to perform better than YSU’s 28-10 victory over the University of Dayton on Thursday.
But Saturday’s contest will mean something different for senior defensive lineman Kyle Sirl. He will go head-to-head with senior offensive lineman Kalvin Harrington, one of his closest friends from high school.
“When we both decided to go play where we did with our respected teams, we would be like, ‘Man, it would be so sweet to play against each other,’” Sirl said in Tuesday’s press conference. “That was even before we set foot on campus, and now that day’s here.”
Sirl and Harrington attended Cloverleaf High School and helped the Colts reach their first playoff birth in program history in 2008. Sirl said he’s never faced Harrington competitively before and only during practices did the two collide.
Former Cloverleaf players are expected to attend Saturday’s game when the Penguins and Eagles begin at 4:00 p.m. at Stambaugh Stadium.
“We’ve got that debate going between our friends of who’s better,” Sirl said. “Neither of us knows what to say, because we’ve never been put in that situation.”
The No. 25 Penguins head into the game 1-0 after the program’s first-ever win over Dayton, though Wolford and others were not satisfied. The biggest concern on Wolford’s mind is turnovers, which the Penguins did four times.
“I don’t like to see the ball turned over,” Wolford said. “We can’t have turnovers to win football games. We saw last October what happens when we turn the ball over.”
Senior quarterback Kurt Hess accounted for two turnovers with interceptions. The third-year captain threw for 73 yards and no touchdowns. Wolford said it was more fundamentals than anything else, and he expects Hess to play better.
Hess’ longest throw was a 23-yard pass to junior Christian Bryan, who was the Penguins’ leading receiver in the game. However, Bryan left the game after he was hit in the ribs.
“He’s still a little bit sore,” Wolford said. “He took a shot in the ribs. It was a pretty good shot by that kid, but he’ll be fine.”
What helped YSU offensively was the rushing game led by senior Adaris Bellamy. He ran for 203 yards on 17 carries and one touchdown. Bellamy had more rushing yards in the season opener than all of last year. His 203 yards were also the most by any Division I running back in the first week, making him the nation’s leading rusher at this point in the season.
“I knew Bellamy had it in him,” senior tailback Torrian Pace said. “I know you guys haven’t seen him as much over the year or two, but I knew that he had it in him, and that’s how he is. He’s very talented, and I’m excited to see what more he has to bring to the table.”
Pace ran 11 times for 49 yards and two touchdowns, junior receiver Andre Stubbs ran twice for 68 yards — including a 60-yard run and right behind them is freshman Martin Ruiz with 45 yards on 11 carries and one touchdown — though Ruiz lost a fumble.
“Martin Ruiz has caught on very quickly,” Pace said. “It’s going to be exciting to see as the season goes on and what he can do, especially in the upcoming years. He’s definitely improved from summer camp up until now. It’s going to be very exciting to see him as the days, weeks and months go on.”
Defensively, the Penguins allowed 270 yards, forced eight punts and collected two interceptions though there is room for improvement.
“There were a lot of things that we like on film, but there are also some things that we need to get better at,” Sirl said. “What we have going for us is our effort on defense, and it really showed, especially in the red zone.”
YSU leads the series against Morehead State (8-6) and won the last meeting, 38-14, in 1987. The Eagles fell at home, 13-10, to the University of Pikeville in their season opener. Morehead State also plays in the same conference as Dayton, the Pioneer Football League.
Thursday was Hess’ opportunity to perform against a familiar foe being from Dayton. Saturday is Sirl’s turn.
“I take this game very seriously because I feel like I have something to prove,” he said. “I have my pride on the line. No matter how well I do against him, at the end of the day, he’s still going to be my buddy.”