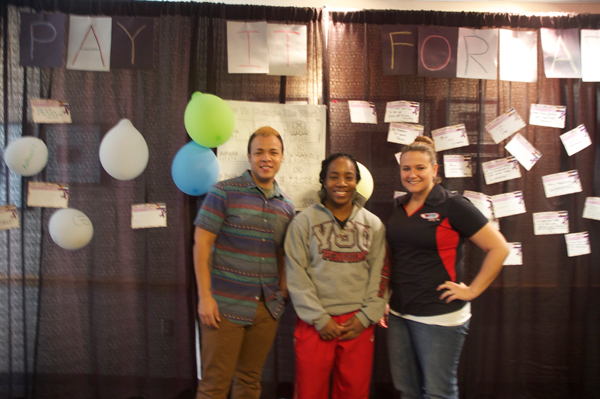 From Nov. 18-22, students were given the opportunity to journey through the Tunnel of Oppression exhibit to learn about various forms of oppression and discrimination.
Sponsored by Youngstown State University’s Housing and Residence Life for the seventh consecutive year, the “tunnel” was made up of the Presidents Suites in Kilcawley Center. The rooms were filled with information and imagery to invoke a powerful learning experience.
Macey Nortery, graduate assistant in Housing and Residence Life, explained a few of the different things the tunnel represents.
“The tunnel of oppression highlights discrimination, the different hardships that we face in our society today that have come about along the years and the many adversities that different cultures and people face, whether its race or gender,” Nortey said.
The images shown at the start of the tunnel were graphic. Foul messages were displayed to show how people have to face oppression before they can reach the “light at the end of the tunnel.”
“Once they walk through the different rooms, they’ll reach the room of hope at the end to simulate the light at the end of the tunnel,” Nortey said.
Nortey explained that the tunnel sends a powerful message to everyone who participates.
“It hits home for everyone, and it’s empowering to walk through. It’s nice because it has a direct effect on people, and it opens their eyes to things that they might not see every day. Our message is to not be naïve or ignorant to the things that surround us every day,” Nortey said.
This year’s tunnel has incorporated new content that deals with cancer awareness and relief for the Colorado disaster fund.
“We wanted to highlight the Colorado Relief Benefit and pass out balloons to students. They can donate if they choose to, and we’re also giving out ribbons to anyone that walks through in support of pancreatic cancer since it is cancer awareness month,” she said.
Nortey said she hopes that the Tunnel of Oppression left a lasting impact on participating students.
“There is hope for change. It takes just one step at a time,” she said.
Nortey said that students had a mixture of emotions when they walked through the tunnel. Jerrilyn Guy, accounting major, called the tunnel a good idea that promotes equality.
“I didn’t think it had a direct effect on me, but it does send out a message of social equality to every student that walks through. It shows how we can overcome hate in our society and just be content with those around us,” Guy said.