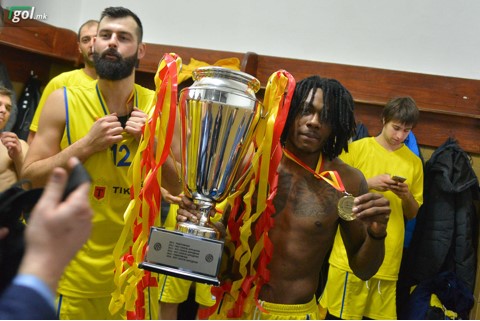 After his YSU tenure ended in 2014, Perry continued his career overseas.

After leaving college, he signed with the Sydney Kings of Australia in 2014. Perry said the leap from college to professional international play proved to be an adjustment.

“The style of game is faster, more physical, kind of the same transition from high school to college basketball,” Perry said.

While the college and international style is drastically different, he cites some ways in which the two are familiar.

“The road trips are pretty similar,” Perry said. “Practicing, eating together at the hotels and spending time with teammates in closer quarters.”

One change that comes with professional basketball are the motivations of the players as their responsibilities go beyond the game.

“A lot of these guys [especially the older guys] have their own families and priorities,” Perry said. “So it’s not like we can sit around and play 2k all day like we would after practice at YSU.”

While some may consider overseas a step down, Perry sees it as an opportunity to continue doing what it is he loves. He described the experience as being “humbling,” among other things.

“It can open your eyes to show you that things we may complain about in the states are very minor on a global scale,” he said. “Getting to meet different people, try different foods and learn about different history makes the experience great.”

Since moving to Sydney, Perry has become accustomed to the international style of play. After a brief stint with Memphis Grizzlie’s D-League Affiliate Iowa Energy, he headed back overseas to Hungary.

There he played for Körmend, a team Perry believed he had something special with before a knee injury derailed his season.

“The guys on the team were close, everyone seemed to be on the same page and obviously it helps when you’re successful on the court as well,” he said.

Playing overseas allows him to play the game he loves, but it takes him away from the people he loves, something Perry says comes with the territory.

“Anyone that knows me knows how much time I spend with my family and childhood friends back home,” he said.

His brother, Aubrey Perry, knows this all too well as he’s currently playing soccer in Sweden.

“I’ve been playing overseas since 2013 so it’s something our family has gotten used to,” Aubrey Perry said. “There’s usually a period, a month or so, when neither of us are home so that’s when the house is quietest.”
With both Perry brothers out of the house, Aubrey Perry assured that while their absence is hard, their parents know it’s been good for them.

And though Kendrick Perry’s collegiate career has passed, he said those days were some of the best of his life.

“I’ll always look back on my days at YSU with the utmost gratitude for all of those who helped me grow as a person on and off the court,” Kendrick Perry said.

To former YSU teammate Blake Allen, Kendrick Perry is still a player that leads by example.

Kendrick Perry’s current team, Karpoš Sokoli, recently participated in a midseason tournament that produced a National Cup for the club. With the win, Kendrick managed to get a glimpse of that team success he longed for.

“Personally, it was a great feeling for me because I never won a championship,” Kendrick Perry said. “In high school, Austin Rivers and Winter Park derailed my journey to the state championship.”

Coming off the cup win, Kendrick Perry and Karpoš Sokoli are eyeing a bigger prize: a Macedonian League championship.

And while playing in the NBA is the goal for many basketball players, Kendrick Perry isn’t too worried about whether he’ll suit up in an NBA jersey.

“At this point, it doesn’t matter. I’m not going to base my playing career on whether or not I make it to the NBA or not,” he said. “Now with that being said, I will continue to work as hard as possible and be the best me I can be.”