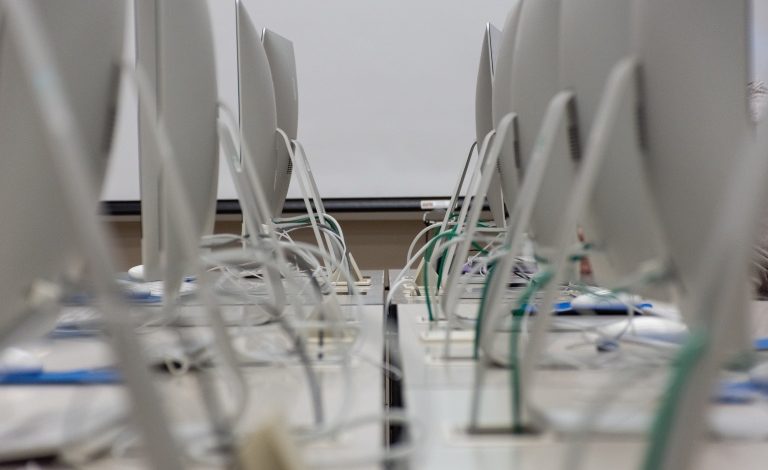 The world of technology comes with complex issues, and at Youngstown State University the IT Service Desk is the first line of defense when problems arise.

Technology can be a determining factor in a students’ academic education, along with faculty, who work to provide an educational environment for students.

Jim Yukech, associate vice president and chief information officer, said YSU is in the second year of a five-year refresh of technology on campus.

“We’ve gotten a lot of the oldest technology out of there. You should see a lot of experience in a lot of these classrooms with the newer technology,” he said.

Yukech said several issues contribute to classroom technology not working and requiring help from the IT Service Desk.

“[The classroom has] one of those multimedia units that haven’t been refreshed yet, and it’s old and the workstation is seven years old. If it’s old, it’s just bothersome,” he said.

According to Yukech, another issue is when technology on campus malfunctions, causing the IT Service Desk to respond quickly and efficiently.

“We consider classroom technology issues a severity level one, meaning it’s our most important thing because that means a faculty member is sitting in their classroom and can’t use the technology,” he said.

Yukech said having technicians around campus is still a learning process.

Dan McCormick, a desktop technician with IT Customer Services, said when an issue cannot be resolved through the IT Service Desk, it’s passed to him.

“Any kind of classroom issue is elevated top priority because we don’t want to lose any class time,” he said. “We will rush to that room, talk to the professor, see what the issue is and if it’s within our ability to fix it or at least fix it for the time being.”

According to McCormick, big projects such as replacing lab computers or refreshing them are scheduled for break times due to less people coming to campus.

“The preventative maintenance we do during downtime or four hours in a day or we also have been replacing classroom equipment,” McCormick said. “Some classrooms have way older equipment than is standard now, so if we have enough time to swoop in there and replace as fast as we can.”

Even with the help of the IT Service Desk, the first semester of designated zones for field technicians is still in the works and issues still arise in classrooms across campus.

Cryshanna Jackson Leftwich, associate professor in the Department of Politics and International Relations, said she has had several issues with technology on campus.

“I might take an hour and a half, two hours to look at the information, put the PowerPoint together and then I can’t even show it in my classroom,” Jackson Leftwich said.

She said she had an issue with a projector in one of her classrooms at the beginning of the fall semester.

She said she had an internet connection problem at the beginning of a class this semester, and after calling the IT Service Desk, it took 40 minutes for a technician to come.

“They came out during the class time, which is better than normal,” she said. Rosalyn Donaldson, manager of the IT Service Desk and training, said starting this semester, technicians are assigned to zones that usually encompass two or more buildings.

“The IT Service Desk is the first point of contact for any technology-related issues that students, faculty and staff might have with their phones, computers, desktops,” Donaldson said.

She said the Service Desk has taken a new approach to sending technicians out when an issue surfaces.

“We have representatives throughout campus in nearly every building,” Donaldson said. “We actually have 10 people, but they cover a variety of locations, and so it’s helped us be a little quicker, getting to our faculty whenever they’re having trouble with their classrooms.”

In Donaldson’s opinion, the first semester of this approach has been a continued improvement.

“The IT department continues to look at our services and try to serve our campus better and better each semester,” she said. “We think that our customer service has improved tremendously.”

Tasha Wells, manager of campus technology support, said the IT Customer Service has several different projects and initiatives to ensure classrooms and buildings have the newest technology in place.

According to Wells, the university is divided into five zones. Each zone has a few buildings with two technicians per zone.

“So they’re close to proximity; they’re in these buildings and they can get there more quickly, where before they were in [Meshel or Maag Library]. So some faraway points on campus could have taken 10 minutes before they could respond,” she said.

According to Wells, if an issue arises and IT support is needed, students and faculty can find a tech support help button on any computer screen that will take them directly to where they can put in a ticket for help.

Wells said that after receiving feedback, issues will be fine-tuned to ensure the process runs more smoothly.

Rebecca Goterba, a sophomore nursing major, said she mainly has issues with the printers and Wi-Fi on campus.

“It’s just always something,” she said.

Goterba said she uses the Wi-Fi in Cushwa Hall every day, but there are days when it won’t connect.

“It’s not perfect yet, but it’s a model that will get better over time,” Yukech said.