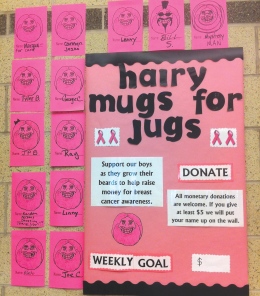 The board explaining the Hairy Mugs for Jugs fundraiser is located outside of the Rec Center. The men plan to grow their beards until the end of the semester. Photo by Taylor Phillips/The Jambar.

The guys of the Andrews Student Recreation and Wellness Center now have a new reason to sport extra facial hair.

“We’ve raised $200 over the past five weeks,” said Jeff Davidson, a sophomore participant.

A board at the entrance to the Rec Center shows the growth of the beards, as well as progress made during the fundraiser. All funds will be donated to the Pink Ribbon Cheer Classic, which is scheduled for Oct. 28 at Beeghly Center.

“If you donate more than $5, you can get your name up on the board to support us,” Davidson said. Senior Tyler Bass came up with the idea for Hairy Mugs for Jugs. He said growing his beard out is easy — and kind of fun.

“Every year, we do something special for breast cancer,” Bass said. “So, we came up with growing our beards out.”

The main reason for the students’ participation is Linda Frank, the Rec Center’s administrative assistant.

Frank was diagnosed with breast cancer 23 years ago. Both of her children were around 4 years old at the time of her diagnosis.

“I was very scared,” Frank said. “At that time, there wasn’t as much hope for survival as there is now. I guess I associated my diagnosis with a death sentence.”

“It means a lot, especially to people like me who have had breast cancer and beat it,” she said.

“But it’s way past that point,” he said. “Words of advice: Shave at the neck because you don’t have to worry about it itching too bad.”

Andy Schumaker, a senior participant, said he’s not even attempting to trim it.

“I’m just going to let it go,” he said. “You got to comb it every once in a while to get all the food out.”

Schumaker then demonstrated his grooming tips by picking his beard with a comb.

“You got to go big, or go home,” he said. “People probably think we are homeless, but I swear we aren’t homeless. So, campus security, please don’t hassle us.”

The bearded boys will make an appearance at the Pink Ribbon Cheer Classic.

“We will be doing something a little special at the Cheer Classic,” Vukovic said. “But you will have to go to find out because it’s a surprise.”

Visit the Rec Center’s front desk to donate or to find out more information.