The Chris Gunther Show from Youngstown State University’s Rookery Radio is going to the Stellar Awards in Las Vegas and will most likely broadcast live this weekend.

The Stellar Awards website states they are the first and only gospel music awards show in the country.

“It’s like the Grammys of gospel,” Gunther, a telecommunication major, said.

Gunther said he applied last semester and was approved to take his show to Las Vegas several weeks ago.

Kenny Reyes, Rookery Radio advisor, said they will try to broadcast live from the red carpet on Saturday from noon to 3 p.m. Pacific Time.

Gunther said having the opportunity to go means the world to him.

“I know it may come off as cliché, but when I first started my journey on the station people looked at me like I was crazy,” Gunther said.

His first show was R&B and hip hop, but he transitioned to gospel music.

“I said this is what I’m going to do, this is what God is leading me to do,” Gunther said. “They looked at me like I was crazy back then but look at me now.” 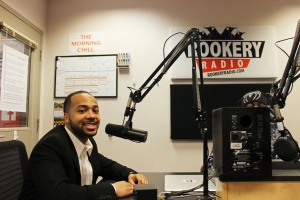 Gunther said he has interviewed about 20 gospel stars for the Chris Gunther Show.

He said he wants to take away the good and the bad from the trip.

“The good part of it is you get to do something not a lot of people can say they did fresh out of school. Directly out of Rookery, and even coming from this area. A place that means the world to me,” Gunther said. “In this area you have a lot of obstacles against you, a lot of negative things.”

He said being able to go to the Stellar Awards is a blessing.

“Now, the bad part is you might not be able to interview every single artist that walks by,” Gunther said. “But just knowing that you are in the same vicinity, the same networking environment, and you get the chance to be there and then knowing that you’re still gonna get a chance to interview some of the top people, that’s a blessing right there.”

Reyes said it is a huge accomplishment for Rookery to be taking this trip.

“You don’t have to be a communication or a radio buff to get the experience. It’s all about networking. Rookery has helped a lot of us,” Reyes said. “You don’t have to fall into a certain category to be able to bless other people.”

He said it isn’t just about radio, it’s about learning to develop your craft and finding yourself.

“It’s also about going beyond your comfort zone. Being on the radio, you have to ask the prying questions. You have to reach out to people and do your research,” Reyes said.

Reyes has worked with Rookery for going on seven years.

“Rookery does not function without Kenny,” Gunther said.

Adam Earnheardt, chair of the communications department, said this is exactly why Rookery Radio was created seven years ago.

“Just last November one of our student DJs was invited to the NASCAR championships, and now Rookery Radio will be represented at the Stellar Awards,” Earnheardt said. “That’s a testament to everything the Department of Communication and people like Kenny Reyes have been doing for our media students.”