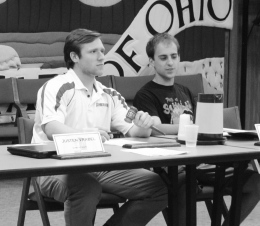 As the end of the semester draws near, Student Government Association President Elyse Gessler and Justin McIntyre, executive vice president, reflect on what they accomplished and what they could have done differently.

“It’s not by any means finished. We’re still in the process of trying to figure out what we want to do,” Gessler said. “We have a lot of components of what we would like to see from a first-year experience; we just have to be serious about it and buckle down and bring it all together.”

“There’s been dialogue for many years about it,” McIntyre said.

“Cory and Justen are coming back from our administration. They’re going to see, [Was] SGA transparent enough? Was this effective? Did the students like this?” Gessler said.

During their time in office, Gessler and McIntyre have appropriated $32,383 to student groups and revitalized the “Last Lecture” series.

“We were very careful about who we picked, and the turnout was pretty successful,” McIntyre said about the “Last Lecture” series.

“I’m hoping that they’ll continue that next year, and they’ll be mindful of the professors they pick, that they’re very student-oriented.”

Gessler said that, by working in conjunction with Penguin Productions and Greek Life, they were able to utilize connections and expand student programming.

In their platform, Okular and Vrabel focused on looking at the goals of the YSU 2020 Strategic Plan and working with that.

Under student success, they would like to continue progress toward a first-year experience, increase bulk tuition rate, reform the meal plan and encourage more students to study abroad.

Some of what they would like to accomplish will be done during their term, while others — they admit — may take longer.

program would not happen until at least fall 2013.

“We can’t go in and say, ‘This is what we [want to] do.’ We have to go through the steps of convincing administration, convincing faculty that this is best for YSU students,” Vrabel said.

They said they feel that a first-year experience would foster academic success for students. They would also like to encourage more students to study abroad.

“One of my biggest regrets is not researching sooner and seeing how inexpensive studying abroad is. There’s a lot of places you can go to and pay the same tuition you would at YSU,” Okular said.

He said that students bringing back what they’ve learned in another culture would benefit the university as a whole.

“It’s not like we’re pushing students away from YSU. We just want them to have a fuller college experience, and that’s one of the things they can do,” Vrabel said.

They said they would also like to see an increase of bulk tuition rate from 12 to 16 credit hours to 13 to 18 credit hours.

“Right now, if you took 12 credit hours each semester here at YSU, it would take you five and a half years to graduate,” Okular said.

“So, I think it only makes sense that we go back to a maximum of 18 hours as what you pay for the maximum bulk rate.”

They said they feel this will be their hardest task.

“If it is accomplished, it will also have the greatest impact to students because not only will students be saving money, but they will be graduating sooner, which also benefits the university,” Okular said.

He said they have a meeting set up with dining services to reform the meal plan, an item they added to their platform while campaigning. They’ve already begun canvassing campus to collect student input.

Under accountability and sustainability, they would like to establish a timetable on renovations for Kilcawley Center and other buildings.

“We had been working with them to develop the plan and details of the plan,” Okular said.

Okular and Vrabel said they believe that since the Kilcawley Center plans were shelved, the student body deserves to know when renovations will take place.

Under student engagement, they’d also like to add an official student section to athletic fields.

“On a personal level, I am very passionate about YSU athletics. I think that one of the best ways to promote a sense of school pride — a sense of community on campus —is through athletics,” Vrabel said.