This semester YSU employs 608 adjuncts — or part-time faculty — and 409 full-time faculty. In 1975, adjuncts made up less than 25 percent of instructional staff at colleges and universities nationwide. This number has grown to over 40 percent in 2011 according to the U.S. Department of Higher Education.

As of 2013 — the last year for which the Ohio Department of Higher Education has released data — only 49 percent of student credit hours at YSU were taught by full-time faculty. Adjuncts teach the majority of the rest, with the exception of those taught by retired faculty serving on extended teaching service and graduate assistants.

Martin Abraham, provost of YSU, said adjuncts are incredibly important to the University. 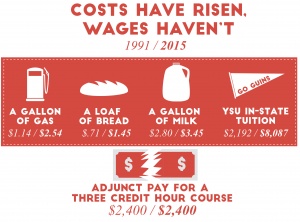 “We would not be able to deliver the education we do if it weren’t for the part-timers — the adjuncts,” Abraham said.

Despite their increasingly important role at the University, adjunct faculty pay hasn’t changed. The 24-year pay freeze amounts to a 75 percent decrease in wages when adjusted for the rise in the cost of living using the consumer price index.

“All across the University, and not just this University, but adjuncts at any university are paid garbage,” Schueller said.

Schueller said this can make it difficult to attract faculty in a field like computer science, where consultants can make $300 per hour.

“You’re lucky to get a high quality adjunct,” Schueller said. “The fact that we have them surprises me to no end. I don’t think I’d do it for that kind of money.”

Abraham said adjuncts are underpaid, but they aren’t paid much better at other universities, and the market hasn’t required YSU to increase wages.

“We’re able to fill our teaching needs with part-time faculty who are willing to teach at the crappy rates we pay them,” Abraham said.

Julia Gergits, chair of the English department, said an unintentional side-effect of the Affordable Care Act has compounded the low pay by limiting the number of hours the University permits adjuncts to teach.

“We’re not letting them teach that extra course or two that they taught before,” Gergits said. “That’s a lot of a loss for somebody who doesn’t make very much money to begin with, and we had no choice about that as a department. It just got imposed.”

State law also requires adjuncts to give 10 percent of their wages to the State Teachers Retirement System of Ohio. However, when they retire, they are forced to choose between collecting their pension or collecting Social Security.

Adjuncts serve multiple roles at the University. More than 100 of them teach the communication, English and math classes all students are required to take as part of the general education model.

Outside of those departments, there is no correlation between the number of general education courses a department offers and the number of adjuncts it employs. This is because many of the departments relying heavily on adjunct labor are skill-intensive fields employing professionals to provide students with an inside view of the profession.

“One of the things that we talk about that our part-time typically bring is experience actually working in an area,” Abraham said. “Many of our full-time faculty went to graduate school, got their Ph. D., maybe did a postdoc and took an academic job. So, there are going to be different types of experiences.”

According to Joseph Mosca, dean of the Bitonte College of Health and Human Services, this is the case in his school, where adjuncts comprise 67.9 percent of the faculty.

“Obviously we have great full-time tenure track faculty,” Mosca said. “But we supplement with people who have tremendous clinical expertise and a tremendous ability to really give students an experiential understanding of the profession that they’re entering.”

In some other areas, departments rely on adjuncts who view it as a part-time job and those who are pursuing full-time positions, but do adjunct work in the meantime.

Gergits said she tries to dissuade people from considering it as a long-term career.

“If you’re trying to live on it, yeah, it’s bad,” Gergits said. “If this is your whole salary and you get no benefits — and the retirement is dismal — you get some [State Teachers Retirement System of Ohio pension], but it’s not much, and you really could be fired tomorrow. It’s a hard way to go.”

Thomas Sabatini, an adjunct who has worked in the history department for 15 years, said the claim that adjunct positions are temporary is misleading.

How We Got Here

One of many reasons YSU has relied more heavily on adjuncts is because of a declining share of revenue coming from the state.

“One must recognize these trends aren’t simply in Ohio or at YSU. They’re not simply in the very recent term. These are long term developments in higher education, the strategies of which we can see hatched in the ‘70s,” Sabatini said.

Gergits said it reflects a shift in the workforce at large. She said several of her graduates work part-time online with multiple companies as consultants.

“It’s not just us. We might be egregious. Academe is pretty bad, but many people now are spun out to nothing but contractors,” Gergits said. “It’s a whole trend in the culture that really undercuts the ability to have health care and retirements, or enough of a living wage without working five places.”

“If you put this in the context of the overall economy, there’s just been a change in terms of how labor is used,” Sumell said. “It almost seemed to be kind of a cultural shift of anything that’s cheaper is better, where in reality that’s not actually true.”

Sabatini said adjuncts aren’t special, the problems they’re facing have already been dealt with by autoworkers and others in the past.

“You can still go on to an assembly line now and see autoworkers making nice bank, and sitting next to them is someone working for $11 an hour, on the same assembly line, doing the same job,” Sabatini said. “There’s a two-tiered wage structure in the economy generally, and it’s in the university system as well.”

The range of income adjuncts receive can vary widely depending on their work outside of the University.

James Zupanic, a retired tenured professor who works as an adjunct, recounted a story someone told him at an event in Akron.

“When you graduate, the next time you bump into one of your adjunct professors [they] might be a person that is hiring you for your first full-time degreed professional job, or it could be somebody delivering your pizza. It’s that big of an extreme,” Zupanic said.

“As a former full-time faculty member, I’m really queasy about the situation we’ve gotten ourselves into,” Zupanic said.

While the chairs we spoke to were adamant that adjunct faculty are qualified to teach the courses they do, adjuncts are under unique pressures that make it difficult for them to deliver the same experience to students that full-time faculty do.

“No matter how good those people are, if you’re making some very low wages — and you may be trying to run around between different schools, putting miles on your car and different time on your clock — it’s a lot,” Zupanic said.

Gergits said it really wears on people, and it can be debilitating in the long-term.

Zupanic said an English composition teacher who was getting grants to attend writer’s institutes in California eventually quit because it was too much.

“She was so bombed out from grading stuff, and she eventually quit teaching,” Zupanic said. “She’d love to teach, but she just couldn’t make it.”

He said the uncertainty as to whether or not they’ll be teaching the same classes in the future can lead adjuncts to put in less than they would otherwise.

“When you’re teaching a class, you want to make it better and better every year,” Zupanic said. “You’re trying to invest more than what you might invest if you thought you’re only going to teach it this year and not again.”

Abraham said the University intends to increase the level of tenure-track positions as things begin to move in a positive direction.

“We’re becoming more engaged, and I expect over time as we get our enrollment sized correctly, as we see more students who will participate in the honors program, as we bring more international students, we’re going to see a higher proportion of full-time — tenured, tenure-track people,” Abraham said.

Sabatini said there is no way to maintain higher education institutions as legitimate if we don’t reverse the trend of increased reliance on adjuncts.

“Not only will the nation destroy what was the world’s premiere system of higher education by deprofessionalizing it and underfunding it to the point of exhaustion and death,” Sabatini said. “Higher education will cease to look the way it has.”