The Youngstown State University Department of Communications will host the 8th fundraising Halloween party at the Youngstown Inner Circle on Oct. 26 at 7 p.m.

Jeffrey Tyus, a communications associate professor at YSU, started this event eight years ago. The money collected for the event has been sent to the American Cancer Society every year.

According to the American Cancer Society, 1,688,780 new cancer cases and 600,920 cancer deaths are reported per year. To put this into perspective, an estimated three cases and one death occur per minute as of 2017.

Tyus said that he is always passionate about being involved with the community and charity work.

“I thought [fundraising a Halloween event] would be a good and fun activity,” Tyus said. 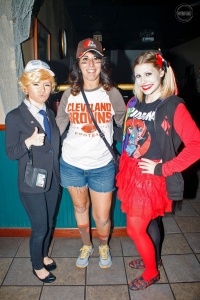 He said having enjoyable activities would encourage students to participate in their community and charity work.

Last year, a few hundred people attended, with President Jim Tressel joining as a judge for the costume contest. Tyus is expecting a similar turnout this year.

This charity activity has been very successful, gathering between a minimum of $400 and a maximum of $1,100, Tyus said.

Tyus said the communication department buys pizzas and punch from Inner Circle, selling a slice and drink to attendees for $5.

Holly Massuccio, a server at Inner Circle on campus, said the one side of the store is packed during the party.

“People who win the contest sometimes donate the money right back to the cancer foundation,” she said. “It’s a lot of fun.”

Heather Collins, an employee at Inner Circle, said all the employees wear costumes at the event. She said it’s challenging to talk with people due to noise, but still finds it enjoyable.

Sam Granick will be bartending at the event. Granick said she will soak gummy worms and Skittles in vodka to serve as Halloween specialty drinks.

There will be a costume contest, karaoke, a ticket raffle and music provided by the band Dirty Rhythms and Rookery Radio. Karaoke runs from 7 p.m. to 9 p.m., the contest and judging begins at 9 p.m. and the band will play after the contest.

Costumes will be judged with some criteria, and the winner will get a prize during the event, Tyus said.

He said this event is open to the public and students are encouraged to participate in the costume contest as well as provide donations to the cause.

“It’s always been really just a fun time for friends to get together,” Tyus said.