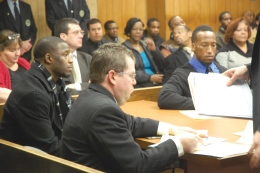 A solemn Edward Robertson, far left, sits with his attorney, Scott Cochran. Lavell Sharp, far right, awaits his fate from Judge Elizabeth Kobly. All eight suspects in the hazing case had their charges sent over to the Mahoning County Court of Common Pleas, where they will await possible indictment from a grand jury. Photo by Jordan D. Uhl/The Jambar.

Breylon Stubbs, 22, said he was always enamored with the Kappa Alpha Psi fraternity.

He had conducted independent research on the organization’s ideals and philanthropy.

Yet, when he would head to a home occupied by its members, he said he was expecting to be physically abused.

Stubbs said he was struck nearly every night from Jan. 19 on, being hospitalized twice as a result.

Stubbs, a sophomore at Youngstown State University, testified that he endured this treatment while pledging the now suspended Kappa Alpha Psi fraternity. He took the witness stand Friday in Youngstown Municipal Court.

Defense attorneys for Trey McCune, Wade Hampton, Lavell Sharp and Edward Robertson, each charged with two counts of felonious assault, attempted to have the charges reduced in a preliminary trial.

“This case is about hazing. It’s about a misdemeanor-four hazing,” said Dennis DiMartino, McCune’s defense attorney. “That’s what we have. That’s what Trey McCune, at the most, what he did.”

Attempts to reduce the charges were unsuccessful.

“The evidence is sufficient to find probable cause that [all four defendants] committed the two crimes for which [they stand] charged,” Kolby said. “Therefore, each of [their] felonious assault charges are ordered bound over to Mahoning County Court of Common Pleas for further action by the grand jury.”

A two-story white house sits at 942 Woodford Ave., on Youngstown’s South Side. A calm gray sky casts a shadow on what otherwise looks like a typical house in a peaceful neighborhood.

The basement, however, was allegedly home to a living nightmare for lifelong friends ReSean Yancey, 20, and Stubbs.

“I didn’t want to leave ReSean down there alone,” Stubbs said in response to a defense attorney’s question about why he kept going back. “When it first started, it wasn’t as severe as it got the last two nights.”

What started out as “getting wood,” or paddling, eventually led to full-force punches and a night of being repeatedly thrashed with a metal hanger until drawing blood, Stubbs testified.

Stubbs also testified that the eight accused of violent hazing had repeatedly punched them in their chests and arms.

“We were not knowledgeable that it was going to happen,” Stubbs said about the severity.

Stubbs said when he returned to the Woodford Avenue home after being hospitalized for bruised ribs, Kappa Alpha Psi members instructed him to put a red “X” on his shirt to avoid further chest injuries.

That didn’t prevent them from hitting other parts of his body, Stubbs said.

During the last week of January, Stubbs was a lead performer in “Riff Raff,” a play held in Bliss Hall.

The accumulated injuries allegedly sustained in the pledging process eventually took their toll. Nearing the finale of the last performance, Stubbs had to run off stage, where he collapsed due to exhaustion and trouble breathing.

Stubbs said cast members struggled to pick him up so he could return to the stage for the last scene.

Stubbs testified that the abuse continued until the end of January when “things went haywire.”

While driving Yancey to the hospital for chest problems, Stubbs hit a pothole.

“He started convulsing. He started breathing heavily, foaming at the mouth,” Stubbs said. “I didn’t know what else to do.”

Chrystal Clark, 20, went to high school with Yancey. Though she didn’t know him very well, she recognized his name when the local media reported that he was an alleged victim.

“He didn’t deserve that just to be a part of the group,” Clark said.

She knows Ford, but wasn’t aware of any potentially unlawful activity until she saw his name in the papers.

Bud Parrish’s house is behind the Woodford Avenue home that Stubbs pinpointed as the location of the alleged hazing.

The 65-year-old said he had heard about the charges, but was shocked.

Despite claims of raucous, violent behavior, he said he’s never heard any commotion emerging from the house.