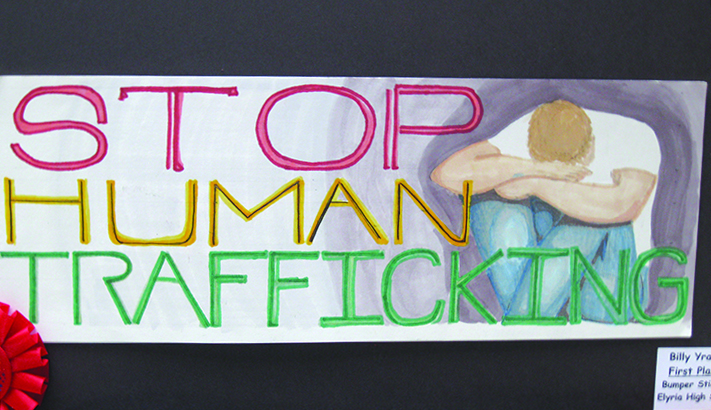 In January, speakers of the TEDx Youngstown event will be sharing their messages with the crowd, and among those is Anne Victory, a Sister of the Humility of Mary in Villa Marie, Pennsylvania, who will be spreading awareness about human trafficking.

Victory grew up in the Cleveland area where she attended Magnificat High School in Rocky River and later on attended St. John’s College for nursing. She then got her master’s in nursing from Ohio State University.

Victory is an education coordinator at the Collaborative to End Human Trafficking. She will be representing the organization and speaking about human trafficking, but focusing specifically on labor trafficking.

“Labor trafficking is actually slavery, forcing people to do work that they do not choose to do, and they are not getting paid for their work and someone is keeping them from leaving their work,” Victory said.

Victory said that there are other forms of trafficking like sex and drug trafficking, but labor trafficking receives the least attention.

The Collaborative to End Human Trafficking is an organization out of Cleveland that educates and advocates for the prevention and abolition of human trafficking, while connecting services on behalf of trafficked persons. The members have been to various parts of northern Ohio and Pennsylvania to spread the message.

“When I first heard about human trafficking, I was shocked that it had happened, and especially that it had happened here because I had thought slavery ended in our country a long time ago. It’s prevalent throughout the world and right here — it’s like an epidemic,” Victory said. “We just don’t see it.”

The group started in 2007 with just four members educated on human trafficking, but since her involvement in 2010, Victory said they’ve educated many others on the subject.

“We started meeting to find out ‘what is this crime really about,’ and ‘what do we do about it?’ We determined right then that one of the things we could do once we learned enough was to educate others,” Victory said. “We’ve made some progress, and we have a long way to go.”

“This is such an important issue to make the public aware of. I really want them to understand that labor trafficking is very prevalent everywhere in the world, and that we are already relying on slave labor, so we have to change that,” Victory said.

Victory is involved in the Sisters of the Humility of Mary, women who provide housing, health care and education services for children, immigrants, refugees and the elderly. She said that they have inspired her to promote social justice.

Victory expressed her concern for the direction of the issue if it’s not stopped.

“It’s a global human rights issue and it’s the second largest criminal enterprise in the world, second only to drug trafficking, and so millions and millions of people are being abused in this fashion everyday,” she said. “This has to change.”

She added that the TEDx event allows her to increase public understanding of labor trafficking, as well as human trafficking.

“This is my first time being connected with the TEDx event, but I think it’s a good opportunity to help people become more aware of this horrible crime, and perhaps, an opportunity to do something about it,” Victory said. “We can’t do anything about it unless we are first aware that it’s an issue.”