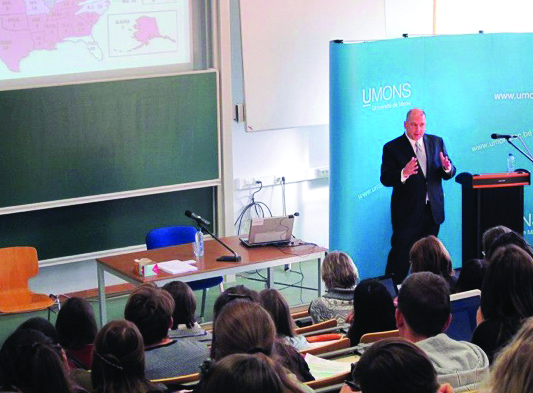 After a successful first year, TEDx Youngstown will return at the Ford Theater in Bliss Hall on Jan. 23, 2015 with a host of speakers discussing an array of subject matter — from magic to cricket to politics. One of the 14 speakers will be Youngstown State University’s very own Paul Sracic, chair of the department of politics and international relations and director of the Rigelhaupt Pre-Law Center.

With a Ph.D. and M.A. in political science from Rutgers University, Sracic has garnered international attention as an expert in his field, appearing as a regular contributor to lauded publications like The Washington Post and TheAlantic.com, and teaching American Politics overseas at the University of Tokyo and the Sophia University of Japan.

Ohio as a swing state

Sracic said his speech will primarily concern Ohio as a powerful swing state — a state in which no party or candidate consistently comes out on top in presidential races.

“This is going to be very similar to the first chapter of a book I am publishing with Dr. [William] Binning in March. It comes out in CQ press about Ohio government politics. The introductory chapter is about Ohio as a swing state,” Sracic said. “It is just sort of explaining why Ohio is seen as the ultimate swing state. Why we get so much attention when we are only one state with a significant number of electoral votes but not that many — 18 and shrinking. Yet, we seem to be more important every election.”

In the United States, presidential elections are not decided by the popular vote. Instead, they are determined by the Electoral College. Each state has a certain number of electoral votes based on their total population. Whichever candidate wins the popular vote in that state, receives all of the state’s electoral votes. In turn, whoever wins the Electoral College, wins the election.

Since the 1960s, Ohio has been building its reputation — both internationally and nationally — for being a major deciding factor in any presidential election.

“A few months ago, I was quoted in a blog — a Japanese politics blog actually,” Sracic said. “I had made a comment about something, and he quoted me in his blog. He said, ‘Paul Sracic from Youngstown State University in Ohio.’ Then, in parenthesis, he put, ‘yes, that Ohio.’ Which shows you that internationally — and this is one of the things that I discovered in traveling a lot to Asia and Europe in 2012 — everybody knows about Ohio. Internationally, people know that Ohio gets to decide who the president is, at least that is what they think. I wanted to kind of investigate whether that is true or not. Are we really that important? Why are we seen as sort of the quintessential swing state?”

The reality of Ohio’s influence

In his investigation, Sracic found that it was not Ohio’s 18 electoral votes— which pales in comparison to Texas’ 38 — that made Ohio such an influential state. Instead, it was Ohio’s demographics.

“I think there are a lot of things that go into it. First of all, if you just read the numbers, it is not really true. Most people who have been elected since 1960 could have won without Ohio. So, in some ways it is not true. But, on the other hand, Ohio demographically is very reflective of the U.S. We look like the United States,” Sracic said. “Columbus Ohio is known nationally as a test market. They often start products there first. … If it sells in Ohio, it will probably sell nationally, and you can argue the same thing about presidents. If you can sell them in Ohio, they will probably get purchased nationally. So that is probably more the reason, because we are such a microcosm of the United States.”

He added that the consistent closeness of the presidential elections in Ohio contributes to the belief that Ohio is necessary focal point for any presidential bid.

“I don’t think people realize how close elections are in Ohio, how evenly divided. If you take the elections of 2000 through 2012, presidential elections, and you look at the difference between the Democratic vote and Republican vote, it is less than 1 percent total, over four elections,” Sracic said. “Millions and millions of votes are cast … and, in the end, the division between democrats and republicans is less than 1 percent. So we are really a 50/50 state in presidential politics. … You put that together with the fact that we are so close to the United States demographically, it kind of makes sense that whoever wins Ohio is likely to win the presidential race.”

Power to the people of Ohio

To accent these considerations, the relative importance of the swing states has increased as the country becomes a more evenly divided nation — a trend that is likely to continue.

As a result of this popularity, Ohio has seen a disproportionate amount of attention during election years, with consistent visits from the biggest candidates. The attention does not always stop once the polls close, however.

“You want to have headlines in that paper that read well. … It may not be an accident, giving the importance of Ohio as a swing state, that Youngstown has been mentioned in, what, two or three State of the Union addresses? That is not usual. … And why? Because there has been some federal money that is coming in here,” he said. “It is something like, if you total it, either President Obama or Vice President Biden were in Ohio like once every three weeks. It is practically the northern White House, they spend so much time here.”

The attention does not stop at the national border however. As he mentioned, all around the world, Ohio is viewed as of paramount importance to the U.S. presidential election. Sracic told the story of how one British paper hoped to influence the U.S. election.

“I am going to lead off my presentation with a discussion of a British newspaper that had a letter writing campaign to write to citizens in Ohio to get them to vote a particular way. … They kind of thought that, ‘well U.S. politics affect international politics, so we ought to have a voice. Since we don’t have a vote, we are going to swing the important voters. The most important voters are the ones in Ohio,” he said.

Though the importance of Ohio may be partially perception, this translates to a discernible power for Ohio citizens. Simply put, a swing state citizen’s vote matters more. Sracic points to the extremely close Gore v. Bush election of 2000, and the role Florida’s electoral votes played, to illustrate this point.

“If you think about how close the 2000 election was in Florida, where a few hundred votes determined where Florida’s electoral votes were going to go, and the press did a review of that election afterward,” Sracic said. “They used different criteria for counting. … Under one set of criteria, if you did the recount, I think Gore won Florida by a single vote. So you never know. Yes, your vote really does matter probably more here than elsewhere.”

Although Ohio’s influence, especially as perceived by the media and citizens, could diminish, it would take a significant demographic or voter habits change to remove Ohio as a swing state — neither of which are all that likely.

“We could lose it in any election. … If we get it wrong in 2016 — meaning we vote for a loser — that is going to diminish Ohio’s reputation a little bit. But still, there aren’t that many swing states in the country,” Sracic said. “We always think we come naturally to our politics. We figure out that … because we are for that, we are Democrats. Because we are for that, we are Republicans. A lot of the research shows that it is just the opposite. We define ourselves first as Democrats or Republicans, then we line up our beliefs so they are consistent with that. And because you tend to inherent your affiliation, I think young people in Ohio are inheriting their affiliation.”