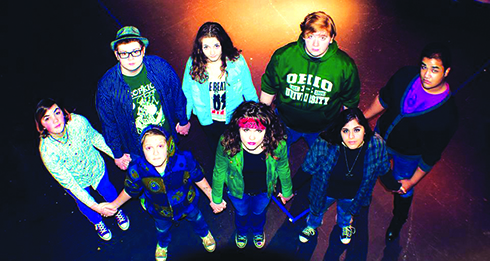 Kristopher North, a young Youngstown resident with a passion for theater, will be taking the TEDx stage this January to inform audiences of a growing issue in the Mahoning Valley – gender equality among youth in the LGBTQIA community.

“There’s a lot of gender queerness popping up a lot more fluently now. There is a lot more youth that don’t identify at their end of the gender spectrum. Although I don’t think that is something that people in this area are really aware of,” North said. “Our goal is to fix that.”

North, 25, was originally from Deerfield, Ohio, and lived in Akron for three years while attending Akron University. He studied business management and minored in theater, and currently works as an employee of the NYO Property Group in Youngstown.

In the evenings, he runs YOUnify — a LGBTQ+ youth empowerment theater troupe in downtown Youngstown — which focuses on empowering LGBTQIA individuals and youth through the arts.

YOUnify is part of a growing organization called the Pride Youth Theatre Alliance, with 23 chapters across North America, as well as a few groups in the United Kingdom.

“It is the only group in Ohio that’s like this. My talk is mostly going to be educating the audience about what YOUnify is and what we are doing, why we do it,” North said. “Our focus is to educate audiences on the struggles and challenges that face the queer youths in this area, especially in the Mahoning Valley.”

During his TEDx talk, a group of students from YOUnify — Stephen Cline, Alexandra DiGirolamo and Breanna Keever — will perform on stage a skit about the struggles they face from those who are not accepting of their sexual orientation.

“We’re working on devising a script right now based on their personal experiences. So my talk is going to be 60 percent of me talking and 40 percent them performing. I’m pretty excited about it,” North said.

North hopes to draw attention to the problem of rising homelessness among LGBTQIA youth.

“Honestly, the LGBTQIA community in this area is not very loud yet. It doesn’t really have a big presence as much as it could, or should,” North said. “It’s important to make sure everybody in this area is aware of what’s happening.”

YOUnify has been in the Mahoning Valley for three years. The first session started in January at the Oakland Center for the Arts in 2011, and the students of the group have since performed in areas in Youngstown like the First Unitarian Universalist Church, as well as Kent State University-Trumbull.

“Audiences have been welcoming and interactive. They’ve been really receptive and we have talkbacks after every show, where the audience can ask any question that they want, and the youth are the ones that answer them,” North said. “The kids are on top of it; they have answers ready to go.”

YOUnify is also working on obtaining independent funding, getting their own 501c3 status to become a non-profit and have just recently attained an additional grant of $1000 from the Mukti Fund — their primary funder and funder of LGBTQIA organizations across the nation.

“We basically just started by having workshops with random youth that wanted to come and see what we were talking about. I wasn’t in charge at the time. I was just a facilitator helping out, but the program surprisingly just fixated,” North said. “People were excited about it. It wasn’t just students that had to be there for their grades; it was actually students that were curious about the program.”

North said that he wants the audience to acknowledge the message of tolerance that his students will portray through the act.

“Become aware of us. Know that we are here. Know that there is a very strong LGBTQ presence in the community, especially in the youth. That’s not going to change, and I want audiences to be aware of the struggles and the challenges that they do face in the school systems, on a day-to-day basis, even at their homes. I want them to get out of the talk exactly what they want to get out of the talk,” he said. “I want them to take away the sense of understanding, even if they are not welcoming or open to the idea of gay marriage or transgender rights, or they are homophobic. I want them to be aware. That’s all there is to it.”

He added that his talk would benefit youth in the area who are looking for an accepting organization, but might not know of YOUnify’s existence.

“Fortunately, I know all of my students come from very loving and nurturing families, but I know that’s not the case for a lot of students in the area. There’s a lot of LGBTQ youth that aren’t aware of YOUnify, who could really use it. So I also would like them to become aware of us through this,” North said.

North said that Lori Shandor, TEDx event curator, contacted him to act as the event’s closing speaker, a job that has left him nervous.

“I don’t like public speaking. I like to act; I like theater, and I like all of that. I’m not big on writing speeches. It took me a couple of days to decide and I was like ‘Ok, I’m in,’” North said. “My youth are writing a portion of it because the point of YOUnify is everything is their voice. It’s their experiences, the way they see it … the way they want to express it. I’m only writing about 40-50 percent of what you’re going to see in January. They should be more nervous than I am, but they’re not. They are ready to go.”

YOUnify is the only LGBTQ+ youth empowerment theater troupe in Ohio, but there are similar organizations all over the United States — such as Dreams of Hope in Pittsburgh, About Face Theatre in Chicago, Rainbow Pride Youth Alliance in San Bernardino, California and True Colors: Out Youth Theatre in New York.

North said that he would like to see more of these groups in Ohio.

“I think they do the best that they can to start everybody in that area, and we try to reach out to as many people in this area as we can. If another opportunity comes up to open a second organization in Ohio, then we are going to take it,” North said. “We’re growing a lot faster than we thought we would. So it’s time for us to branch out on our own and keep going.”