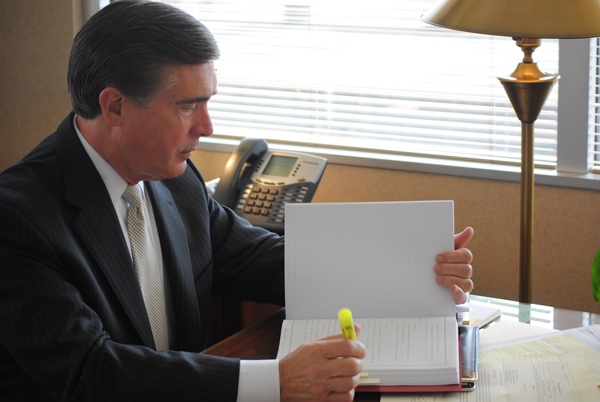 James E. “Ted” Roberts is the newest member on Youngstown State University’s Board of Trustees.  Roberts began his nine-year term on June 26 after being appointed to replace Scott Schullick by Governor John Kasich. His membership on the board adds to the long list of organizations in which Roberts has been involved.
Roberts earned a bachelors’ degree in combined social studies from YSU before receiving his law degree from the University of Akron. He currently practices school, business and employment law. As a Youngstown graduate, Roberts maintains a connection with YSU.
“My wife graduated from YSU too, so she’s my biggest connection,” Roberts said.  “I’ve also been on the limited service faculty at the school of education during the last ten years. … I taught school law and collective bargaining.”
The Board of Trustees consists entirely of volunteers, and Roberts said he is comfortable with volunteerism and community involvement.  He has served as the president of the Mahoning Valley Bar Association, assisted the Salvation Army as a member of their East Side Advisory Board, and worked with the Youngstown Rotary Club.
In addition to teaching at YSU and volunteering in the community, Roberts has also developed a vision for the university’s future success.  He wants to make YSU a stronger educational institution.  This goal, he said, begins by improving enrollment numbers.
“We need to be cognizant of the market forces that attract students and do not attract students… We have been losing enrollment over the last several years so the university needs to determine why and how that can be improved,” he said.
Roberts also said that he hopes to act as a liaison between the university and Youngstown residents.
“The Board of Trustees are essentially the citizen representatives for the University. We connect the people who work there and the students who go there to the thinking of the community in which they are operating,” Roberts said.
Roberts explained that the ultimate goal of the Board of Trustees is to better YSU’s students.
“As long as we can keep the focus on how best to strengthen the future success of the students that we’re teaching, everything should come out okay,” he said.
Fellow board members Carole Weimer and Harry Meshel expressed confidence in Roberts’s abilities.
“He’s a wonderful addition to the board,” Weimer said.  “He has a lot of years of experience in education. Legal experience, obviously, is always most helpful as a board member, but he has also been very involved with Youngstown City Schools in a legal capacity for a number of years… We thank the governor for making a thoughtful and excellent choice for the board of trustees.”
Meshel agreed with Weimer.
“Ted has had an extraordinary legal career and married into a fine family.  He’s a great admission…. He’s one we can all be very proud of having with us,” Meshel said.
As a trustee, Roberts will be able to vote on all Board issues, including personnel, curriculum and business decisions.