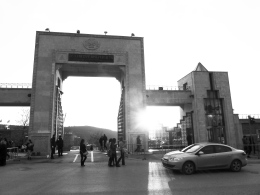 Students walk through the gates of Yeditepe University, established in 1996, in Istanbul, Turkey. Photo courtesy of Marco Fox.

With a high unemployment rate and jobs still hard to come by, some engineering students are looking to the Middle East and its petroleum industry for their future.

Fox, who is interested in a career in the oil and gas industry, said Turkey represents a stable job market in a country that is more secular than many Westerners imagine.

“Americans have this perception of the Middle East that is shaped by what we see on the news,” Fox said. “One of the most important parts of the experience for me was actually being there myself and meeting people and discerning for myself what’s real and what’s not.”

Although he considers himself a Christian, Fox is interested in and has been studying Islam and Islamic culture.

“For someone who is thinking of working over there, I think it’s important to understand the culture and the way people think,” Fox said.

Although countries under fundamentalist religious leadership border it, Turkey’s cultural climate is more secular than other countries in the region. Its political ties with the West make it an attractive option for Western students interested in studying in the Middle East.

“I’ve wanted to study abroad since I started school. I asked about it during my first and second semesters and was told that, especially with an engineering degree, it would be better for me to go earlier rather than later to avoid any problems with upper-level credits transferring,” Fox said.

Yeditepe operates a reciprocal student exchange program with YSU that allows American students to study there for the same tuition rates they would pay at YSU.

Turkish students are also able to study in America under their Yeditepe tuition.

“I went through the Center for International Studies and Programs [at YSU]. It was very economical. The housing was free, and all my financial aid from YSU transferred. Any grants or anything I have here applied at Yeditepe,” Fox said.

Each year, 40 to 50 YSU students choose to spend a semester or a summer term abroad, said Jef Davis, CISP director. The largest concentration of students go to Winchester University in England, but CISP helps students from all majors and programs study all over the world.

A substantial portion of students study abroad for their language requirements, Davis said.

Studying abroad can be beneficial for students from all departments and majors, Davis said.

Davis said the intellectual task of working to understand another culture promotes cognitive development and helps to teach skills that are in demand in the job market.

Fox also took advantage of the Benjamin A. Gilman International Scholarship Program, which offers grants to qualified American undergraduate students to study abroad. The program receives congressional funding and is sponsored by the Bureau of Educational and Cultural Affairs and the U.S. Department of State.

Students are required to submit grant requests to the program, which are reviewed and accepted at a rate of only one in four.

“If you just make a small effort to show them you’re trying to learn and appreciate their culture and language, they really open up to you. The people were some of the friendliest I’ve ever met,” Fox said.

Fox said he took one engineering course during his time at Yeditepe because he wanted a lighter course load that would allow him to travel and experience various Middle Eastern cultures and countries.

“The engineering professor I had there had actually taught at Cleveland [State] University, so he spoke very fluent English and was easy to understand,” Fox said.

Fox also completed several of his general education requirements, such as speech and history, at Yeditepe. Those credits will transfer to YSU.

degree in petroleum engineering that will allow him to work in the oil and gas industry in the Middle East.

He said he thinks his experience in the region will help distinguish him in a competitive job market.