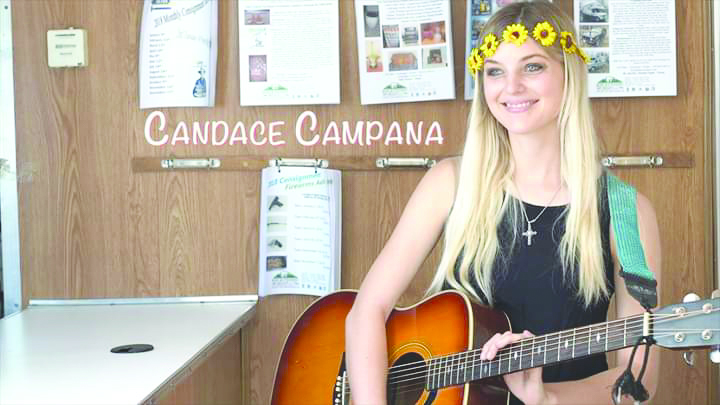 Candace Campana is climbing the ladder in her singing career. This year, the Youngstown State University alumna was asked to sing the National Anthem for the Cleveland Indians and at the Equine Affaire show in Columbus.

Candace Campana said the Equine Affaire show celebrates the horse, and hundreds of thousands of people attend. She said a lot of quarter horses are featured in the show, horses are for sale and different exhibits are on display.

“It’s a huge celebration of the horse and the Fantasia show takes place in the evening. And that’s a ton of trick riders [and] light shows,” she said. “It’s really fun.”

Candace Campana said the event is something that she has always gone to, but she never thought that she would be asked to perform at it, which is a huge deal to her.

“About 10 years ago, my brother got a horse, and he kept telling me to come to the barn with him,” she said. “I went with him and directly next to his horse, was a really skinny, scrawny, pathetic looking animal and I felt really sad for him.”

Candace Campana said she kept going to the barn specifically to see this horse and found out more about him, and his owner had starved him, he was abused and passed along from home to home.

“I completely fell in love with him, and he was really bad and really misbehaved,” she said. “I took it upon myself to save him and to make him into what he is now. Ever since then, my drive in the equestrian world has been unreal.”

In regard to her upcoming performance of the National Anthem for the Indians, Candace Campana said she loves representing YSU. She said last year, YSU President Jim Tressel threw the first pitch when she got the opportunity to sing for the Indians.

“We’re making a name for ourselves,” she said. “When I’m at that arena and I’m singing, everybody is forced to listen. I love the fact that that arena holds like 40,000 people, so [I’ve] always wondered who [is there].”

Candace Campana said the hope of someone hearing her sing for the Indians and deciding that she needs a record is always on her mind. She said celebrities can be in attendance, and she never knows who is going to hear her sing.

“I’ve always sang [the National Anthem] the way it’s supposed to be sung,” she said. “I don’t like to hear it changed. That is the biggest compliment I ever get when I’m done singing, usually by veterans that tell me that.”

Candace Campana said she wants to take her singing career as far as she can go, and she is always looking for people to perform with.

Candace Campana submitted to sing at the Pittsburgh Pride festival in June. She said they have been writing back with her, and they seem very positive that she will be getting a time slot.

Dalton Campana, Candace Campana’s brother, said she has always been passionate about singing ever since she was young, and he has always followed her career path.

He said it’s always been entertainment, singing, modeling and acting for his sister.

“She’s never changed with that,” he said. “I know how much it means to her, and she’s very talented. I’m very proud of her.”

Dalton Campana said he is supportive of anything his sister does, and he will do anything in his power to help her.