In its previous matchups, Youngstown State played Oakland University and Detroit Mercy before concluding its road trip against Wright State.

“At times, we show our youth. We also show how hard it is to win on the road. I don’t care what league you’re in; it’s very difficult to win road games. I think our young group is realizing that,” YSU Head Coach Jerrod Calhoun said.

The Penguins lost despite solid performances from Jeremiah Ferguson and Cameron Morse who both scored 21 points. The performance of Oakland’s Big 3 — Kendrick Nunn with 26, Jalen Hayes with 20, and Martez Walker with 13 points — overwhelmed the defense for YSU.

YSU managed to improve in areas it has struggled with, such as shooting the ball. YSU shot 48 percent from the field and shot 12-for-18 from three. The Penguins shot poorly from the charity stripe, hitting just 63 percent from the free throw line. That has been a problematic area for the team this season.

The Youngstown State University men’s basketball team lines up for the National Anthem during its game the University of Indiana on Dec. 29.

YSU then took the short trip to play the University of Detroit Mercy. 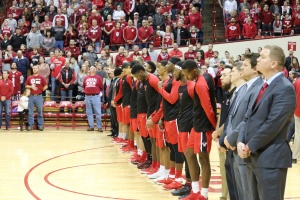 Despite six players scoring in double figures for YSU, the tandem of Corey Allen (34 points) and Jermaine Jackson (32 points) helped Detroit leave Calihan Hall with a 93-91 victory. With the win, Detroit (6-14, 2-5) got within a game of the Penguins.

Morse was the hot hand for YSU as he shot 10-for-20 from the field and tied a career-high of six 3-pointers to go along with four assists. He ended the game with 26 points. Other contributors for the Penguins included Devin Haygood and Naz Bohannon who both managed double-doubles. Haygood had 14 points and 11 rebounds while Bohannon had tied a career-high 13 points and 12 rebounds.

The chaotic game saw more than 11 lead changes en route to the Titans win. Despite the seven-point lead YSU had to end the first quarter, Detroit powered back with a 9-2 run. From there the 3-point shooting of the Titans took over and that eventually became the difference.

The road trip culminated in a third loss against the league-leading Wright State University Raiders. The Penguins fell 77-67 due to a late game spark from the Raiders. Wright State (14-5, 6-0) continued its seven-game win streak.

Leading Wright State was Jaylon Hall and Loudon Love who each scored 16 points and anchored the team’s offense past YSU in the 2nd half to seal the game.

The high scorer for Youngstown State included Braun Hartfield with 26 points, Jalen Benton with 12 points and Bohannon with 11 points to go along with his 15 rebounds, a tough feat for the undersized forward as he gets his second straight double-double.

“He’s [Naz Bohannon] got a pair of hands that I haven’t seen in a while,” Calhoun said. “He snatches rebounds, he snatches loose balls. If you study his game, he gets his hands on a lot of balls.”

While it won’t show up in the win column, this young Penguins team showed promising signs of a team on the cusp of being the squad Calhoun envisioned when he took the coaching job.

“I think we have a lot to build off of. I think our guys are a very angry team right now. They’re upset because they know the opportunities that were there on the road,” Calhoun said.
Calhoun is hoping with a return home to Beeghly Center things will begin to pick up for his team.

Youngstown State will return home to continue its conference play against University of Illinois at Chicago tonight at 7 p.m. and then YSU faces Indiana University-Purdue University Indianapolis on Saturday at 7 p.m.