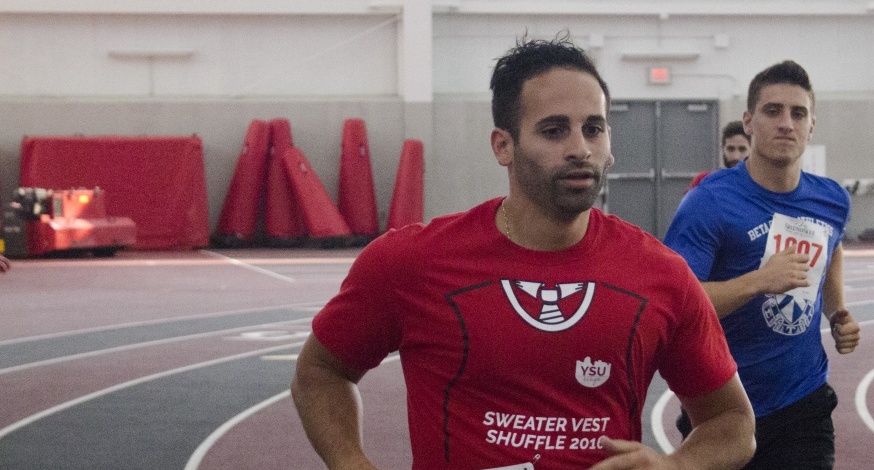 People donned red shirts with a sweater vest print as they ran in the Sweater Vest Shuffle on Saturday, a fundraiser that raised money for YSUscape’s revitalization efforts.

The Sweater Vest Shuffle began at the Watson and Tressel Training Center and stretched through campus in a two-mile loop.

Chretien said he worked with different offices at YSU to put the event together. Chretien went to the Student Activities department and the campus police, got approval from the Watson and Tressel Training Center and Second Sole Athletic Footwear in Boardman.

YSU students, Jenna Portale and Adam Ralph, both came out on Saturday to participate.

Ralph said he participated because staying active and meeting new people in student organizations are important things for him.

“It changes what the community does for the future,” Ralph said.

“Between connections you get from volunteering, as well as the quality time you spend with those people, you can definitely establish good relationships for years to come,” Burger said. “It can be really handy and valuable to have those relationships in multiple situations.”

President Jim Tressel attended the Sweater Vest Shuffle Fun Run, and was impressed that students came early on a weekend to get involved with their community. Tressel said students becoming active in the community will instill pride in the Youngstown area and teach youth important lessons.

“It’s just fun to see how active our guys and gals are,” Tressel said. “They know that their classes are important but getting involved outside the classroom is equally important, and it’s fun to see them do it.”

Tressel had important advice for other students considering volunteer work and getting involved with YSU beyond their studies.

“Our Student Government Association has got a great conduit out to the community and the campus activities, so going over to the Student Activities offices at Kilcawley Center, if they go there, believe me they’re going to have every opportunity they can possibly dream of,” Tressel said.