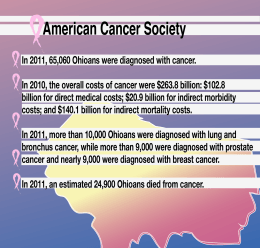 Stephanie Chimento was one of thousands to hear the three words that no one ever wants to hear: “You have cancer.”

Chimento, a Youngstown State University alumna, was diagnosed in 2005 with stage 4 Hodgkin lymphoma and has been going through chemotherapy, radiation and surgeries.

According to the American Cancer Society, more than 65,000 Ohioans were newly diagnosed with cancer in 2011.

These numbers continue to increase each year.

“My family went through hell,” Chimento said. “A lot of driving back and forth to the Cleveland Clinic.”

Though cancer does occur more in adults, children are also at risk. People think most cancers are genetic, but that’s not always the case.

Chimento had no family history of cancer.

The National Cancer Institute found that only 5 percent of cancers are inherited; the other 95 percent come from damage done to the genes throughout life.

Such damage may be the result of hormones, the metabolism of nutrients within the cells or external factors such as tobacco and other chemicals.

The American Cancer Society promotes healthful lifestyles that may lower the risk of cancer. Being active and maintaining a healthy weight helps to ensure that cells are receiving the right nutrients to create a healthy immune system, which will fight the diseased cells that can ultimately become cancer.

“The way my cancer was caught was I lost a lot of weight. I was always tired. So I got my blood taken, and it came back as anemic,” Chimento said. “They did some tests on why I was anemic, and they found out I had Hodgkin’s lymphoma. I had lymph nodes in my chest and neck, and now they moved to my abdomen.”

Chimento said her struggle with cancer has been difficult. She has gone through two rounds of chemotherapy and radiation and two stem cell transplants.

The type and stage of cancer determines the treatment.

Some cancers need monthly treatments, while others require weekly treatments. The stage of the cancer also determines whether the patient will undergo chemotherapy, radiation or surgery.

Since Chimento was diagnosed with stage 4 Hodgkin lymphoma, her treatments were more intense. Using chemotherapy along with radiation increases the chances of killing the cancer cells.

Chimento is still not in remission, but after finding out that she was allergic to one of the chemotherapy drugs she was on, she will be starting a newly approved drug in April known as Brentuximab, which was approved by the Food and Drug Administration in August.

“It is in the category of antineoplastic monoclonal antibody. It is used for failed transplant patients,” Chimento said.

Chimento will receive regular scans to check the progress of the chemotherapy. The scans will also determine how long she will have to go through treatment.

She will be traveling to the Cleveland Clinic for a treatment that is given intravenously once a month. The side effects of the drug include fatigue, anemia, nausea and neuropathy. The FDA did clinical trials and found that the remission rate increased with the use of this drug.

There are many programs that help patients. There are funds for transportation, housing and medical bills. The American Cancer Society holds hundreds of events to raise these funds. Not only does the money go to the patients; it also goes toward research.

“I did stay at the Hope Lodge while going through two transplants,” Chimento said.

The Hope Lodge is funded by the American Cancer Society and gives patients and their families a place to stay while they undergoing treatment in another city.

Chimento said she is hopeful for the future.