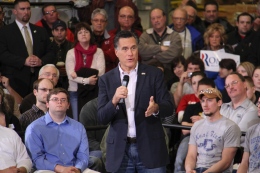 Mitt Romney addresses a crowd of 500 during Monday’s visit to Taylor-Winfield Technologies in Youngstown. Photo by Dustin Livesay/contributor.

Ohio and nine other states hold their primaries on Tuesday, with the four Republican candidates salivating at the prospect of claiming their share of the 437 delegates.

No other primary election boasts as many participants, making Tuesday a valuable asset for campaign strategists.

To boost his chances, Mitt Romney visited Taylor-Winfield Technologies in Youngstown on Monday.

Romney primarily addressed his aspirations for the economy in a nation under his administration. He promised job growth and a vibrant private sector.

However, it was what he didn’t address that surprised a high school student, who asked what would be done about tuition costs should Romney be elected president.

“Shop around,” Romney said. “Don’t take on too much debt, and don’t expect the government to forgive your debt.”

An hour after Romney’s appearance, in an empty union hall in Lordstown, attorney David Betras, chairman of the Mahoning County Democratic Party, read a prepared opposition statement to a handful of reporters.

“[Romney’s] visit gives us the opportunity to remind the people of our community how little he cares about them,” Betras said.

He said Romney’s support of wealthy corporations exemplifies his preference for Wall Street rather than Main Street.

“And that means he’s dead wrong for the Mahoning Valley,” Betras said.

Paul Sracic, chairman of the political science department at Youngstown State University, was surprised that Romney would make a last-minute stop in such a highly Democratic area.

“I didn’t expect him to spend his time and resources here,” Sracic said.

With 66 delegates, Ohio boasts the second-highest delegate total, just 10 behind Georgia, but some of Ohio’s delegation are out of reach for Rick Santorum, former senator from Pennsylvania and presidential hopeful.

“Santorum failed to register delegates in [two congressional districts that are part of the Mahoning Valley sixth and the new 13th],” Sracic said. “So it is quite possible for Santorum to win the statewide vote in Ohio while not gaining as many delegates as Romney.”

Ohio is the primary focus for candidates, strategists and politicians alike, as it depicts a smaller scale of the national demographic.

“If Romney wins Ohio, for example, he becomes the presumptive nominee for the party,” Sracic said. “To win the presidency in November, you have to win in Ohio.”

While Georgia is Newt Gingrich’s home state, experts aren’t necessarily sure it’s a done-deal for the former speaker of the House.

“Gingrich is not a lock in Georgia; he may win, but it will only be by plurality and a rather small margin,” said Keith Lepak, associate professor of political science at YSU.

The Quinnipiac University Polling Institute has been collecting data on likely Ohio voters for the past few months, with the candidates’ chances rising and falling as a result of their performance in other states.

In Ohio, Santorum’s lead over the field shrunk during the last couple of weeks. What was once a seven-point advantage over Romney has been chiseled away to a four-point lead as of Friday.

“At this point, the Buckeye State is too close to call and is clearly a two-man race between Sen. Rick Santorum and Gov. Mitt Romney,” Peter A. Brown, assistant director of the Quinnipiac University Polling Institute, said in an issued statement.

On Monday, a Quinnipiac poll found that Romney had overtaken Santorum by three points, now leading 34 to 31 percent.

On campus, students had mixed emotions over whom they’d choose, with some simply removing themselves from the debate.

A non-scientific poll conducted by The Jambar on Friday showed that of 115 students, only 47 were intending on voting on Tuesday. The remainder either wasn’t voting or was unsure.

The Jambar distributed 120 surveys between the hours of noon and 2 p.m. on Friday in Kilcawley Center, DeBartolo Hall and Cushwa Hall. Incomplete surveys were discarded.

“Students should also observe primaries for what they reveal about the candidates’ own campaign machines and on whom they rely for money,” Lepak said.

Of the 115 surveyed, 20 students said they would support Paul, 10 backed Romney, nine would vote for Santorum and two favored Gingrich. The other 70 were unsure whom they aligned with most.

Santorum and Gingrich visited Ohio during the past week, but spent most of their time in Bowling Green, Dayton and Cincinnati.

Santorum will hold an election night party in Steubenville on Tuesday night.

The closest Paul came to Ohio is Idaho. With public appearances there and Alaska, Paul has devoted all of his attention to two of the three caucus states voting Tuesday.