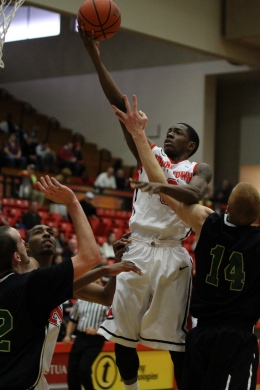 On Saturday, the Youngstown State University basketball program ended the 2012 calendar year on a high note. Hosting doubleheaders at the Beeghly Center, the men’s and women’s teams both earned victories heading into the New Year.

The men’s team opened against Marygrove College and recorded YSU’s eighth victory of the season, stomping the Mustangs 93-52.

“We were glad to get this one out of the way,” said assistant coach Michael Wernicki. “This was a really good tune up and an important tune up for us,” he said. “We needed to get a lot of guys a lot of minutes.”

“I’m glad I got it out of the way,” Perry said. “I know a lot of people were pressing me about it.”

Perry’s 1,000th point came on a layup at the 15:37 mark of the second half. Penguins head coach Jerry Slocum promptly called a timeout so Perry could be honored for the accomplishment.

“I think it just shows all of my hard work paying off,” Perry said. “I still have a long way to go, but I’m definitely appreciative of all the time and hours my coaches and my teammates have put in with me.”

Continuing the positive vibes, the women’s team turned in a gritty effort against Bucknell University for a 69-51 victory.

After leading only 32-24 at halftime, the Penguins made an extra effort to get the ball to senior forward Brandi Brown in the second half.

“Coach [Bob Boldon] told Heidi [Schlegel] and Brandi [Brown] to go to work in the post, because they couldn’t stop us,” said junior forward Karen Flagg, who finished with a career-high 12 points. “Eventually, as soon as we started scoring in the post, that’s when it started coming out to the 3-point line.”

Boldon’s plan worked to perfection, as YSU outscored Bucknell 37-27 in the second half. Brown led the Penguins with 20 points, while Shar’Rae Davis added 15.

“[The team] kind of fell in love with shooting 3s,” Boldon said. “We became very stagnant offensively and didn’t move much, and we weren’t attacking the hoop…We made a number of corrections at halftime, and one of them was to be more aggressive getting the ball to the rim.”

The women next play on Friday at Virginia Commonwealth University. The men, meanwhile, open Horizon League play on Wednesday at the University of Illinois at Chicago.