Imagine spending a year of college in a place that is much different than Youngstown, such as Seoul, South Korea. Emily Henline, a Youngstown State University junior, is doing exactly that.

She said studying abroad has always been something she wanted to do. Henline has previously visited European countries, but wanted to go to a country with a completely different culture. 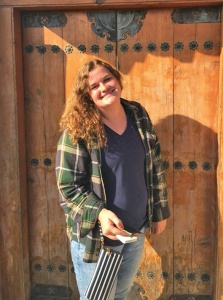 “After doing some research on Asia, I began to enjoy Korean culture and wanted to learn more about it and the language,” she said.

Henline was a recipient of the U.S. Department of State’s Benjamin A. Gilman International Scholarship to study abroad.

Gilman scholars receive $5,000 to study abroad with additional funding for the study of a critical language overseas, which American undergraduate students who have limited financial means to study abroad.

“Without this scholarship, I would have struggled a little harder financially to study abroad,” she said.

She said she also received a scholarship from YSU.

Henline said before coming to South Korea she learned Korean for over a year at the Korean church in Youngstown because they have language classes every Sunday.

“Now that I am here, I am taking a two-hour language class every day,” she said.

She said South Koreans do not care about what the North Koreans say because they have been dealing with tension since the country split in 1945.

“They are prepared for an attack and actually have a mandatory two-year military service for all males,” she said. “Other than being prepared, Koreans typically do not worry about it daily. They go about their lives and if the time comes, it comes.”

Henline lives in an international dorm with exchange students and a few Korean students at Yonsei University. She said it is hard to make native Korean friends.

She said she believes the key to studying abroad is making friends both native and international.

“Upon making my Korean friends in the new club I joined, I noticed that the drinking culture in Korea is no joke,” she said. “The last bus and subway come around midnight, so often times Koreans stay out drinking until the first one starts again at 5 a.m.”

Henline said her most memorable trip since arriving in Seoul was when she visited Changdeokgung (창덕궁).

“There is a secret garden that takes up about 60 percent of the grounds, so it was really nice to go there and walk through a forest after being in the city and around buildings all the time,” she said.

She said she likes Korean hip-hop and went to a two-day festival.

“That was pretty memorable for me because it would have been impossible for me to see something like that in America with all my favorite Korean hip-hop artists,” she said.

Ann Gardner, assistant director of international programs, said studying abroad in a culture that is different will make Henline independent.

“It’s going to show her flexibility, her adaptability and she’s going to use every skill she has to navigate this culture,” Gardner said.

Gardner said Henline is the only YSU student studying abroad in South Korea.

Henline said Asia is a great place to further education while experiencing a different culture, but to do research on customs before coming to the country.