Studying abroad is an opportunity to experience a country’s history and culture. For Rose Rivera, a Youngstown State University junior, spending the 2018 spring semester in Thailand was more than that.

“There are times when I encountered situations overseas that were disheartening, but I never lost sight of how it was my adventure and I had to make the most of it,” she said.

Rivera was a recipient of the U.S. State 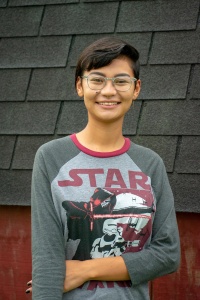 “The application process was rigorous and exhausting at times, but it was all worth it for something this prestigious,” she said. “The detailed essays and heavy commitment toward the scholarship really paid off.”

Ann Gardner, assistant director of international programs, said Gilman scholars are required to carry out the Follow-on Service Project proposed in their scholarship application within six months of returning to the U.S.

“Rose and other Gilman scholars are expected to spread the word and promote the Gilman scholarship,” Gardner said. “Students interested in studying abroad are highly motivated by hearing others’ experiences, and when they meet students like Rose, they know they can overcome challenges that come with studying overseas.”

“Some of the best relationships I formed were during my internship at Burisiri hotel in Chiang Mai,” she said. “Making connections was valuable because natives of the area were very understanding and willing to help foreigners when needed.”

Although most Thai people speak English, Rivera did research on the language and culture before traveling.

“My family speaks a bit of Thai, so it was easier for me to pick up,” she said. “It’s important to be respectful, as long as Thai people can see a foreigner is making an effort, they should not feel discouraged if they struggle with the language at times.”

Rivera said if a student is interested in Thailand or another country for studying abroad, they should not limit themselves to staying in one area during their experience.

“Even though I studied in Thailand, I also made trips to Malaysia, South Korea and Vietnam,” she said. “It’s important to take advantage of seeing the countries around you, especially when they all have such different and beautiful qualities.”

One of her favorite places she visited was Vietnam. She said the people were kind and that she’ll always remember when a group of Vietnamese school children walked up to her, eager to practice their English.

“I had no clue it was going to be so developed due to what I have learned about it in the past,” she said.

Rivera is prepared to influence and empower YSU students this upcoming semester who are interested in studying abroad.

“It took a lot of strength to get through certain obstacles, but studying in Thailand was one of the best decisions I’ve made during my time in college,” she said.

Ann Gardner said if a student is interested in a study abroad program, they should attend information sessions Fridays at noon in Jones Hall 1042 or call the International Programs Office at (330) 941-2336 to register.

“We cover many topics including the best way to choose a country, how a certain language could apply to someone’s career and what program is best for a student’s major,” she said.

There will also be a Study Abroad Fair Sept. 25 from 9 a.m. to 3 p.m. in Kilcawley Center for students who are interested in learning more about overseas study opportunities.

One thought on “Studying Abroad: A Rewarding Experience”