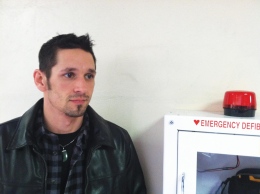 Sophomore Bill Soldan, 30, who hasn’t had health insurance since he was 18 years old, is uncertain about his health coverage in the future. Photo by Christopher Kochera/The Jambar.

On a September morning in 2011, Youngstown State University freshman Kylie Davis’ life changed. Traveling to school on Warner Road near Vienna, she lost control of her car and struck a tree.

The accident broke her back and four ribs, shattered her wrist, punctured her left lung and left her in a coma for three days.

She didn’t have health insurance.

“We’re still getting bills from it, and I don’t know how much they are,” Davis said. “I just know we’re in debt.”

She lost coverage when her mom lost her job as a hospice nurse at Sharon Regional Health System in 2009. Her family is slowly paying off the bill from her accident.

“It stresses me out a lot because I don’t really know where to start with it yet,” she said. “But I’m taking it one day at a time, trying to figure it out.”

Davis, an employee of The Winner in Sharon, Pa., said she couldn’t get health insurance through work.

A 2010 study by the Centers for Disease Control and Prevention reported that nearly 8 million 18- to 24-year-olds do not have health insurance.

Sophomore Bill Soldan, 30, said he hasn’t had health insurance since he was 18.

“I’m not in a situation where it is being offered to me,” he said. Soldan works part time at the Andrews Student Recreation and Wellness Center.

He worked at Cobblestone Corner Concrete Ornamental in Boardman. Last year, the company gave him the option of a pay raise or health coverage. However, the coverage didn’t include his wife, Rebecca.

“That was a really tough call,” he said. “If it would have included my wife, I would have chosen it no question, but I was in the situation where I really needed the extra pay.”

YSU offers a plan for students that is underwritten by UnitedHealthcare. It costs $1,755 annually and can also include a student’s spouse and children.

Soldan has needed medical treatment several times. He said the visits were covered by his employer or paid by working out payments with St. Elizabeth Health Center.

“There’s that little bit of pride where you don’t want them to pick up the bill, and you wish you had insurance to cover it,” he said.

Soldan said he plans to look into YSU’s health insurance plan, but is uncertain about the future.

“Throughout my 20s, it was never a major concern,” he said. “Hopefully, something will come along.”