Curtis Burns, vice president of YESS, said the clean-up was to honor Angela Bell, an environmental studies student who recently passed away.

“A lot of people in the group knew her and had a class with her. We were trying to find something that we could get a lot of people involved in that would be reflected well on her memory,” Burns said.

Burns said he believes Bell would be happy with the event.

“It’s a good thing. It’s going to reflect well on us, and hopefully reflects well in her name,” he said.

Burns also said he wanted to do something that helped volunteers take pride in their campus.

Allison Erf, a YESS officer, said the M-70 parking lot had the most trash and Parking Services wanted it to be clean in time for spring commencement.

Erf said overall, the clean-up will improve the appearance of YSU. She said she wonders why people do not throw trash away in trash cans. 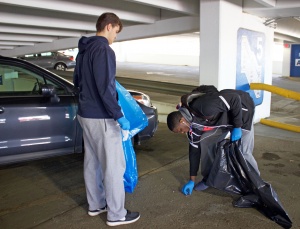 Kevin Stein, a YSU student, said he volunteered because he has seen a lot of people littering around campus. He said that is unacceptable

“I feel that it’s wrong. It makes the campus look bad and makes the environment dirtier and unsafe,” Stein said.