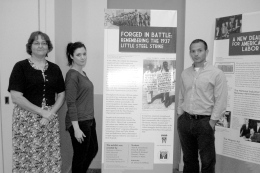 These exhibits were created as part of a two-part class titled Museum Curation and Interpretation, which taught students the basics of how a museum is presented and walked them through the development of their presentations.

“In the first class, we learned about our primary role as museum professionals, which is to present artifacts and information, to interoperate, educate and provoke thought in the museumgoer’s mind,” Dawson said.

In the second part of the class, students were divided into two groups, and each group put together the exhibits that turned into “Forged in Battle” and “Warren 100,” which researched the Warren steel mill’s variety of ups, downs and ownership shifts over its century of existence.

These two exhibits, created by current and former YSU graduate students in the spring, were displayed as part of last week’s commemoration of two major historical events: the 35th anniversary of Black Monday and the 75th anniversary of the Little Steel Strike.

“A lot of research goes into what you read on the banners,” Dawson said. “There is so much information to pick from to accurately tell the story to the viewers without making them feel overwhelmed with information.”

The exhibits were featured along with the introduction of “Labor and New Deal Art” at the Youngstown Historical Center of Industry and Labor on Thursday.

The two-day event featured speeches from authors, historians and scholars to go along with the two exhibits, which have been on display since May.

“It’s great to inform people about something that was so important to the region and its history,” said Clayton Ruminski, an applied history student who worked on the project.

Donna DeBlasio, a professor of history at YSU who helped the students put their work on display, said she was happy to see people turn out to see the museum.

“A lot of people don’t even know the museum is down here,” DeBlasio said. “It means a lot to [the students] for people to see their work on display.”

The exhibits will be on display in the Youngstown Historical Center of Industry and Labor until Nov. 15.