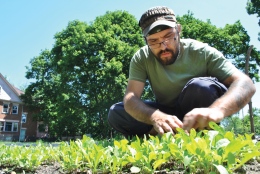 Last year, Nick Avila transformed his lawn into North Quarter Farm on the North Side of Youngstown.

Avila first became interested in Grow Youngstown’s Community Supported Agriculture program last year and has invested $5,000 to lease a farmland from it. He is growing different kinds of vegetables and hoping to sell his crops to CSA this year.

Grow Youngstown is a nonprofit organization that aims to create a healthful, economical and environmentally friendly local food system in the area.

Elayne Bozick, CSA manager of Grow Youngstown, said that more than 90 percent of crops in Ohio are not grown for human consumption, but for livestock instead.

“We want to provide the healthiest food in Youngstown without adding any fertilizers or other chemical substances, [and] also to reduce the use of fuel by traveling the crops,” Bozick said.

The goal of the urban farm program is to help address the area’s food problems. CSA also helps local farmers plan the growing seasons, and it guarantees a stable market. In addition, fresh and locally produced food is provided to members.

However, Avila said that managing the farm by himself is not an easy task. Sometimes, though, his friends volunteer to help out.

“Some of the difficulties, like physical labor and informal structures of the farm, are some of the challenges of running the farm,” Avila said.

Examples of the farm’s informal structures include a loose chicken wire flap instead of a gate and a fence made of chicken wire attached to posts.

Avila hopes to provide more healthful food and beautify lands in the area by putting a great deal of effort into his farm.

“I want to show others how much one person can do,” he said. Avila wants to make his farm as efficient as it can be. He said he believes that running a bigger business or acquiring a bigger parcel of land isn’t as important as enjoying his work.