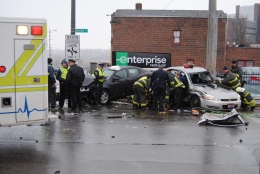 On Tuesday, a car accident involving a 2010 Dodge Avenger driven by a YSU student and a 2008 Chevy Impala occurred on the corner of Rayen and Fifth avenues. The Impala was wrapped around a telephone pole. An ongoing investigation is underway, and the fault of the accident has yet to be determined. Photo by Kevin Alquist/The Jambar.

Sgt. Patricia Garcar, accident investigator for the Youngstown Police Department, confirmed on Tuesday that a Youngstown State University student and two others were involved in the two-car accident that occurred at the corner of Rayen and Fifth avenues on Monday afternoon.

Around 3 p.m. Monday, YSU student Samantha Yoder, 21, of Alliance was driving a black 2010 Dodge Avenger, heading south on Fifth Avenue. Elaine Welsh, 79, of Youngstown was driving a silver 2008 Chevrolet Impala with her daughter, Susan Welsh, 45, of Youngstown. The Welshes were heading west on Rayen Avenue when the cars collided.

The impact totaled both cars and left the Impala wrapped around a telephone pole.

Garcar said the investigation is pending and the fault has yet to be determined. She suspects that one of the cars ran a red light.

Yoder walked away from the accident with minor injuries.

The Welshes were transported by ambulance to St. Elizabeth Health Center for treatment. As of Wednesday afternoon, Elaine Welsh is in stable condition, and Susan Welsh is in critical condition.

Junior Kirstin Simon said her classes were canceled Monday night due to the road closures. Interstate 680 also closed after a tanker truck carrying diesel fuel overturned at 1 p.m. on the state Route 711 connector.

She heard about the accidents via text message through the YSU Alert Notification System.

“I was shocked. Usually, we don’t get a text about accidents,” Simon said. “We get them about the weather.”

Senior Katie Ciccone was also shocked to hear about the campus accident.

“We walked outside and were like, ‘Wow, how are we going to get home?'” Ciccone said.

The intersection closed around 3:15 p.m. A MyYSU personal announcement informing students, faculty and staff of the closures was sent at 4:13 p.m. The intersection reopened later Monday evening.