In 2004, penguin statues decorated by local artists were put on display in Youngstown for a fundraiser. By the end of the year, the penguins were auctioned off and the money was donated to charity.

Catherine Cala, assistant director of alumni engagement at Youngstown State University, and in charge of the penguin project, said it was an excellent example of collaboration between the campus and community. She said YSU partnered with the Community Foundation of the Mahoning Valley through a private donor, who provided some upfront funding to purchase the 31 plain white 7 foot tall penguins. 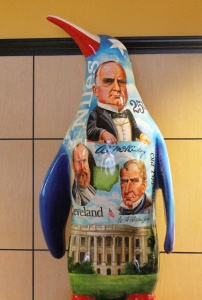 “From the moment they arrived in town — bolted to a flatbed truck that drove in the Homecoming Parade — the project generated unbridled enthusiasm from the campus, artist and valley community,” Cala said.

Cala said the 2004 Penguin Parade engaged community members of all ages, and brought them to campus for the finished penguins’ debut at the Summer Festival of the Arts. She said the completed penguins truly showcased the depth and incredible talent of our valley artists.

“That was a win-win situation for all involved,” Cala said. “Of course, the success of the fundraising auction was a huge thrill as well.”

Cala said many of the penguins are still located on campus. There are three in Tod Hall, two in Kilcawley Center, one in Ward Beecher Planetarium, one on University Plaza, one at OH WOW!, one at SMARTS downtown, one at the Southern Park Mall and more in the community.

Brian Brennan, library operations supervisor at YSU, said the penguins could be decorated however the local artists wanted. He said one penguin was decorated like John Young, founder of Youngstown, and there was another penguin that had an Ohio presidents theme.

“Some of them were beautifully decorative and imaginative,” Brennan said. “It spoke highly of the university.” 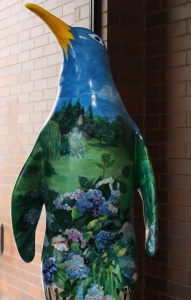 Brennan said the statues served their purpose to raise money for charity, and brought some good in the world through their sale, which says good things about the university. As far as something like this being repeated, he said it would be very unlikely. 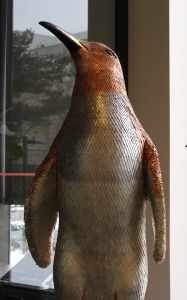 “It was a once in a lifetime thing, a major project, but we’ll see what happens,” Brennan said.

YSU technical services librarian Lisa Garofali said the penguin project was a great way to show the culture of the Mahoning Valley with all of the different organizations and the artists involved.

“I think it was great for YSU to be involved,” Garofali said. “Our university is very iconic to the Mahoning Valley, so I think having these penguins as a representative for donations to charity is a great idea to spread the influence of the university.”

David Sweet, the president of YSU at the time of the penguin project, said that for a bird that can’t fly, these penguins certainly have soared high and they’ve brought us all along for an inspiring ride.