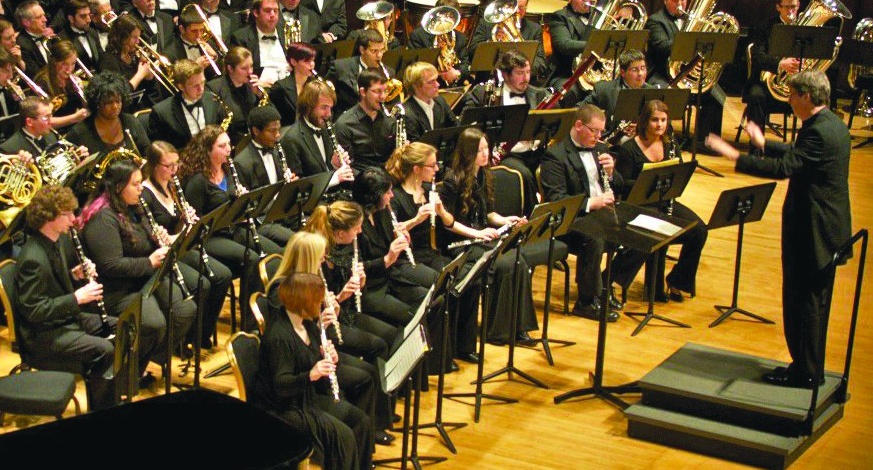 Music surrounded Gage as he grew up — from listening to it during exercise to conducting classes in the practice room of Bliss Hall.

At these universities, Gage had the opportunity to study with the likes of Harry John Brown, of the Milwaukee Symphony Orchestra, David Effron and Paul Vermel to name a few.

After he completed his studies there, he did his doctorate studies at the University of Illinois. He was also student at the Eastman School of Music, which is said to be one of America’s greatest music conservatories.

After graduation at Eastman, he taught music at Auburn High School in New York for nine years. He also served as the director of bands at Emporia State University. After Emporia, Gage found himself as a professor at YSU’s Dana School of Music in 1993 where he is a professor of music and director of bands. He still holds these titles.

Throughout the many years that he’s been a part of the faculty, he has become a mentor to many of his students. Three students in particular, all music majors, have been impacted by Gage’s musical attitude and work ethic each day they take his classes.

After that performance, Miller applied to the Dana School of Music and has been taking classes there ever since. Miller finds Gage’s classes to be informational and also enjoyable with Gage’s positive attitude when he greets his class.

“I thought he was a fantastic, energetic and enthusiastic conductor and obviously worked hard to get his students to perform at the highest possible level,” Miller said. “What I like best about his classes is that he cares so much about each individual student’s success and does whatever it takes to make sure they do succeed.”

Tyler Matthews, cello player, came across Gage when he registered for one of his required classes: Gage’s orchestra.

“I had always heard from the other students who were in band that Dr. Gage was an incredible conductor and teacher, and they were right,” Matthews said. “He has this ability to inspire people and push them even harder, and he is incredibly dedicated to his work.”

In March of 2005, Gage’s wind ensemble performed at Carnegie Hall in New York. Gage said it was a very profound experience for not only him and his students, but also the university as a whole. That was the first time they were represented in that venue. In September 2012, Dr. Gage was appointed as conductor of the W. D. Packard Concert Band in Warren.

This year is Gage’s 20th year as the Edward Zacharias Memorial Chair/Conductor of the Youngstown Symphony Youth Orchestra. From 2008-09, he was given the chance to be the principal conductor of the Dana Symphony Orchestra.

From all of the years that he has been involved with music and molding young minds to understand music structure and scales, this year is very different in more ways than one for Gage.

“This is the best semester I’ve had in 10 years,” Gage said. “There have been many unbelievable experiences.”

Gage said he has been very fortunate with the mass amount of talent that has walked the halls of Bliss, and the students’ willingness to try new things that they didn’t want to do when they were in high school.

Despite having a passion for music, Gage has found it difficult balancing his double life of being a father of three and a husband, as well as a professor and conductor.

“My wife, Stephanie, is my best friend in the whole world, I’m lucky … that I have someone who understands that my first passion is her and my family and my second passion is music and music is a crazy career,” Gage said. “I am always appreciative of the patience my family has to have a career in music. I have to make sacrifices down here sometimes to be the best father and husband that I can be, which is the best that I can.”