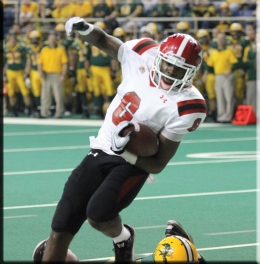 Jelani Berassa runs after a catch during last year’s game at North Dakota State University. Berassa—who had five catches, 97 yards and a touchdown for the game—is forced to help the Penguins from the sidelines this year. Photo courtesy of YSU Sports Information.

What a difference a year makes for football player Jelani Berassa.

In Youngstown State University’s 2011 matchup with North Dakota State University, Berassa caught five passes for 97 yards and a touchdown while helping the Penguins to a 27-24 upset victory.

As for Saturday’s matchup with the Bison, the junior wide receiver will have a different role. Out for the season with a right knee injury, Berassa will travel with the team and room with sophomore receiver Andrew Williams.

“He had a big game in this game last year, and he’ll be there with Andrew the night before,” head football coach Eric Wolford said. “I think Andrew will be fine, but Jelani will reassure him that he knows what he’s doing and coach him up a little bit.”

It’s an unfortunate reality for Berassa to be limited to only coaching duties. Voted captain of the wide receiver unit in preseason, his injury occurred on Aug. 15.

Following the injury was a mourning period, which Berassa said lasted “a pretty long time.”

“I was pretty down on myself,” he said. “I had thoughts of it being over for me. I thought, ‘What’s next for me?’”

How couldn’t he question his future? Not only did Berassa suffer a season-ending injury to his left knee in 2010 at YSU, but the exact same injury ended his junior season at Miami Killian Senior High School.

However, instead of continuing to mope, Berassa made a decision.

“I’m built for this. I overcame it before, and I’ll overcome it again,” he said. “I just need the positive people I have in my life to help me through this, and that’s what I got.”

According to Berassa, the positive people in his life are his family, friends and teammates.

“With the help of my family and my teammates — my family here — they’ve helped me through the process,” he said. “They’ve had my back the whole time. So, the mourning phase lasted for a while, but it’s over.”

Now, Berassa is focused on another task: helping the Penguins from the sidelines. “Jelani’s been at our practices and in meetings,” Wolford said. “He’s a guy that was voted a leader of his group for a reason.”

Berassa said he still has a lot to contribute.

“I’m still leading these guys as much as I can,” Berassa said. “Even though I can’t physically show that I’m leading, mentally I’m helping along the way. If they have any questions, they can still ask me.”

And while the younger receivers can learn from their injured teammate, Berassa has taken this time to be a student of the game. Berassa said he is soaking everything up.

“I see the game at a different view now,” he said. “I see why the coach calls the plays he does.

I’m learning a lot about reading the defenses, why certain plays don’t work and why certain plays do work. … All of that is going to help me in the future when I do come back as a player.” His comeback still has a long way to go, though, as Berassa is still early on in his rehabilitation process.

“The first thing we have to do is get all the swelling out of my knee and walk,” he said. “Then, after that, everything is easier. It’s just strengthening my leg.”

In the meantime, Berassa is just trying to stay positive.

“It’s another chance for me to learn again,” he said. “And I get two more years to go to college, so it’s not too bad.”