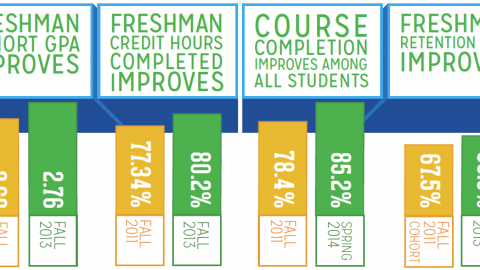 Starfish Retention Solutions — an early warning system to help improve student success — began its trial run in fall 2011 for freshman 1000 level courses. In spring 2013, full use was implemented in all undergraduate courses. What are the results one year later?

Starfish is multifaceted software used by higher education institutions across the country. It tracks students’ participation in classes and provides professors and administration with macro data on student success and retention.

Youngstown State University had three initial goals for its use of the system in 2011: to improve course completion, increase faculty participation in the system’s usage and increase fall-to-fall first-year student retention rates.

Recently updated in November 2014, the Starfish system summarized the results for YSU within these past few years of usage for these three initial goals.

Jonelle Beatrice, executive director of the Student Life Office, explained the importance of faculty participation in the early warning process of Starfish.

“We used to have an all-paper system before the software was implemented — 2 percent of our faculty used it,” Beatrice said. “We need to up the ante here. Our president and provost promote it; I think we need the deans to now enforce it onto their colleges.”

Beatrice explained how even the smallest of percentage increases means that YSU is getting its money’s worth for the software.

“The retention rates are what have helped to pay for the system,” Beatrice said.

Jack Fahey, vice president for Student Affairs, explained how YSU pays for a licensing fee of about $30,000 a year for Starfish.

“These programs are what we should be doing for our students,” Fahey said. “We are obligated to make them successful and to get them the degree they want in a timely manner.”

Fahey added that a 1 percent retention rate improvement could generate close to $495,195 in revenue for YSU.

Both Fahey and Beatrice agreed that Starfish is worth the expense, even if enrollment rates are down.

Emma Kovacs, junior human resources major, has been enrolled in courses where professors have used Starfish. She has received two kudos and one flag in her experience with the system.

“I received a flag for a test score, and having the professor point that out to me showed me how they actually pay attention to individual students. Professors grade so many other tests and papers, it was nice to realize that my professor was making the effort to reach out to me,” Kovacs said. “Starfish is kind of like a progress report, but instead of parents receiving the notice, the student is accountable now, and it depends on the type of student whether or not they improve their performance from the notification.”

An increase in student retention rates, though, cannot solely be attributed to the university’s implementation of Starfish Software. Other initiatives, like more stringent acceptance requirements, may have also contributed to these improved numbers.