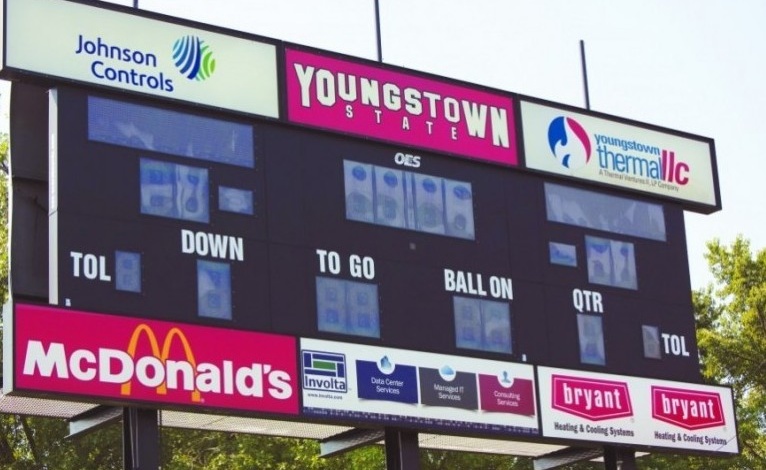 Sitting on the highest peek of downtown Youngstown, overlooking the Youngstown State University campus, Stambaugh Stadium can be seen from virtually any point at YSU.

Stambaugh Stadium, home of the YSU football team, opened in September 1982. Unfortunately, the equipment used throughout the stadium is just as dated.

YSU began renovating the “Ice Castle,” giving the stadium a new look heading into the 2015 season. John Hyden, executive director of University Facilities, said the only restoration that used state funding was the construction on the grand stands, but the funds were associated with a “dedicated fund.” Construction began in late June/early July.

“There was work that went on to the west grand stands, caulking and patching work to the concrete superstructure,” Hyden said. “Then there was the scoreboard work and then there was lighting work. So basically, you had three projects going on … The lights were paid for by the Penguin Club, the stadium was covered through state funds and the scoreboard was all part of the Pepsi contract.”

In past seasons, YSU has been unable to televise many of its night games — with the exception of local TV stations — because the poor lighting didn’t meet NCAA requirements.

The previous lights were approximately 40 to 45 foot-candles, a unit of measure used to determine the amount of light given off. YSU met the minimum requirement for lighting for an NCAA football game.

The new lighting system was installed after a $632,000 donation from the Penguin Club. YSU athletic director Ron Strollo said the new lights would register around 100 foot-candles, allowing for nationally-televised games.

The biggest impact will come if the Penguins find their way to the playoffs. In previous seasons, if YSU made the playoffs, they would have been forced to play an afternoon game. With the new lights, the team would be eligible to play a prime-time playoff game if they have success this season.

The main section of the seating located on the west side of the stadium was under construction throughout the summer as well. The concrete that supported the seats was repaired. Stambaugh Stadium was part of several other buildings on-campus that received concrete renovations due to $393,000 in state capital funds.

“It was to provide weather tightening because we were getting significant deterioration to the concrete superstructure from water getting into it and freezing and busting the concrete up,” Hyden said. “Plus we had a myriad of leaks throughout the facility … So, that was more of a long-term integrity and the structural integrity of the building than it was for fixing the seating. As for the seating, it was fine — it worked just the way that it was. For the maintainability and structural integrity of the facility, we had to take care of it. That’s why state funds were allowed to be applied to that.”

Installation was recently completed on the new scoreboard on the north end of the stadium. The new scoreboard is 35 feet long and 20 feet high, nearly twice the size of its predecessor, and will allow more visibility for the fans.

Strollo said the new scoreboard cost approximately $400,000. Pepsi, who signed a 10-year contract with YSU, covered costs of installation. No public funding or money from the athletic budget was used for the construction of the scoreboard.

Strollo said no additional renovations are planned for the future.