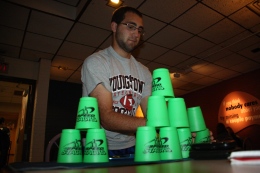 Sophomore Andy Innocenzi, center, helps cup stacking teammates Rachelle Fair, left, and Alysa Nuzzi, right, improve their speed. Innocenzi founded and coaches the team, which has grown to seven members since its inception in March. The first unofficial competition for the Stacking Penguins is Nov. 19. Photo by Dustin Livesay/The Jambar.

In March, sophomore Andy Innocenzi was stacking cups in a Fedor Hall computer lab. Today, the cup stacking national record holder is one of the seven students who make up the Youngstown State University Stacking Penguins.

Stacking Penguins is a student organization that Innocenzi developed during spring semester. The group practices every day from noon to 2 p.m. at Arby’s in Kilcawley Center.

Innocenzi coaches the team, as many of its members have never stacked cups.

Freshman Rachelle Fair said she was added to the team after inadvertently sitting at the designated cup stacking table.

“I have never heard of cup stacking until [I saw] them doing it in Arby’s,” she said.

Innocenzi said he approached Fair about joining the team.

“I taught Rachelle from scratch,” Innocenzi said. “She started in the 40-second range, and now she is stacking in the 11-second range in the cycle. It is really her dedication that helped her get better.”

Fair said she is looking forward to her first meet, which begins Nov. 19.

“I’m just looking towards the experience of going to a meet for the first time,” she said. “I really want to see what it is all about. I just started last semester, so I feel like I have really been doing well.”

Innocenzi said he arranged the unofficial meet to prepare the team for other competitions.

Since Innocenzi was unable to find other schools to compete in the meet, he invited family, Team USA Ohio members and high school friends.

“[The unofficial meet] won’t get any recognition by the [World Sport Stacking Association], so no records can be set,” he said.

“But we simulate a real meet pretty well with officials, judges and all the races.”

The 3-3-3 is where cups are “upstacked” and “downstacked” from left to right in three stacks with three cups in each stack.

The cycle consists of a sequence of stacks combining a 3-6-3 stack, a 6-6 stack and a 1-10-1 stack, respectively. Stackers conclude the cycle with cups in a 3-6-3 downstacked position.

Freshman Alysa Nuzzi is also a member of the team and has stacked cups for many years. She took a break from it because she was afraid there wasn’t a future in the sport.

“I started in about the third grade,” she said. “I kind of gave it up for a few years, and then I found out about [what] Andy was doing here at YSU. It gave [me] an itch to get back going.”

Innocenzi said he concentrates most on the cycle.

“I have been getting under 9 seconds at practice, but records can’t be broken in practice,” he said. His cycle record is 9.69 seconds. “I would really love to get under 9 seconds. If you can do that, you are really in a different league.”

Innocenzi said Nuzzi is the best.

“In 2005, she participated in the World Championships,” Innocenzi said. “She is still getting back into the swing of things, being away for some time, but she will definitely be one of our best.”

Nuzzi said she is excited about competing again.

“I haven’t been to a meet in a while, so I am excited,” she said. “I hope to be somewhere in the 8-second range for the cycle. That’s my goal.”

After the unofficial meet, Innocenzi said the team would prepare for the regional meet in Rochester, N.Y., on Jan. 28. Then it is onto the state championships in May.

“We are looking to finish first in the state,” Innocenzi said. “I have been so impressed with everyone, most of them only doing this for such a short period of time. Finishing first would be great.”