Spirit of the Bear, a local indie rock band, releases its new single “Run My Mouth” on Sept. 8.

Jamie Vitullo, drummer for the band, described the song as pop influenced yet in-depth.

“‘Run My Mouth’ is easily one of the catchiest songs we’ve ever written,” Vitullo said. “Though it may not sound like it, the song is also very complicated at parts.” 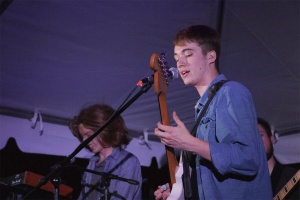 The single will be featured on Spirit of the Bear’s new album, “Fade into Blue,” which will be released Nov. 24. James Harker, the band’s guitarist and lead vocalist, described the album as more mature and put together than their previous releases.

The way they’ve approached the recording made for a more enjoyable process and is what made it stand out from their previous recordings, the band said.

“This summer, we spent so much time together, tailor-fitting these songs to exactly how we wanted them,” said Ethan Schwendeman, the band’s keyboardist. “This upcoming album is wonderful in the fact that every member has put their own thought and feel into each song.”

The band members selected songs from this upcoming album as some of their favorite tunes that they’ve written.

“I’d say that ‘Why Can’t We Talk about It,’ is one I’m very excited about,” Mike Perorazio, bassist of Spirit of the Bear, said. “It has a heavy R&B influence and I feel this could be a favorite for people.”

Although many consider Spirit of the Bear to be an indie band or something that falls into a subgenre of indie, the band feels that they step out of the genre to create their own unique sound.

Each member’s musical taste slightly differs from the next, which may contribute to the mash up of sounds. The group looks up to music acts such as Cage the Elephant, Death Cab for Cutie, Radiohead and Animals as Leaders.

Spirit of the Bear formed in Youngstown in the summer of 2014. The band has obtained a decent following for a band from this area, Vitullo said. He started to notice more of a following when they started playing at bars downtown in 2015.

“I feel like people really enjoy our energy,” Vitullo said. “It’s all very frantic and exciting and I’d like to think that people can connect with it because today’s music is all done by computers and so planned out.”

For Schwendeman, the popularity sunk in during Fiction Forest, a festival held this past summer at the B&O Station in Youngstown that the band brought together. As for how they gained the popularity, Harker believes it was all about timing.

“It was just as the Youngstown music scene started coming up again and we had music that was new and refreshing for the city,” Harker said.

The next Youngstown show for the band is expected to be performed on Nov. 24.