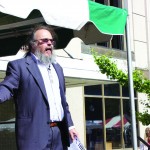 Ray Beiersdorfer, professor in the department of geological and environmental sciences, is holding the Energy and the Environment Lecture Series at Youngstown State University for the third time.

Beiersdorfer began the lecture series three semesters ago to focus on environmental problems impacting the world and the city of Youngstown. The lectures take place every Wednesday in Cushwa Hall and are open to students, faculty and the community.

He said he wants to give members of the community the information they need to stay on top of the issues.

“These lectures are to make people aware. This is the first step when it comes to change. I don’t know how successful it will be, but that’s the goal,” Beiersdorfer said.

Beiersdorfer said he wants to make the lectures relevant to current issues.

He said he likes to have prevalent figures participate in the series. This year, Michael E. Mann, director of the Earth System Science Center at Pennsylvania State University, will be discussing the infamous hockey stick graph — which he helped produce — and the controversy it created.

Mann said he will also incorporate findings from new research into his lecture.

“I will touch on some work we have been doing looking at the increased coastal risk to the U.S. east coast associated with the combined effects of sea level rise and intensifying hurricanes,” Mann said.

Beiersdorfer said climate change will have a tremendous impact on current YSU students.

“I know that students are busy with classes and getting a job, but climate change has been dumped on their generation. Whether or not they want to, they have to be more educated about it, and this is one way they can do that,” Beiersdorfer said.

The lectures will also address the risks associated with hydraulic fracturing, an issue Beiersdorfer is passionate about.

“We have eight months of damage caused by the earthquakes in our wells and properties in Youngstown without the state doing anything about it,” Beiersdorfer said. “Poland gets an earthquake and within one week of it becoming aware to the state and the public the damages get resolved, but not here.”

He said this is a product of environmental racism.

“Environmental racism is when impoverished areas get the toxic waste dumps, get the incinerators, like in East Liverpool. It’s in the books and history that we teach here, that poor predominantly black minority areas get waste dumped on them,” Beiersdorfer said. “I would like in the future for someone to come out to talk about environmental racism and justice because that is a real issue that is affecting the Youngstown area.”

He said he is open to suggestions for future lectures.

“I am always asking the community for recommendations on who they want to see in the lectures. If they have somebody I will reach out to them,” Beiersdorfer said.

He said the lectures have gotten a good response from students in the natural sciences, with between 12 and 50 turning out regularly.

“I had a student come to me this last summer,” Beiersdorfer said. “She was a nontraditional student that was taking general education courses, and because of coming to these lectures, it’s changed how she sees the world and what she wants to teach her students in the future.”

For the complete schedule of lectures and speakers, visit http://newsroom.ysu.edu/speaker-series-on-energy-and-the-environment-resumes-sept-9/.