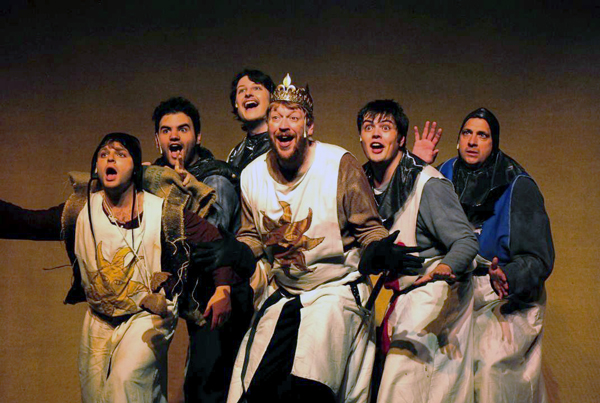 Monty Python fans were in for a treat this weekend as the Youngstown Playhouse opened their first musical of the season, Monty Python’s “Spamalot.”

Now entering it’s 89th season, the Playhouse has opened and closed curtains on myriad productions ranging from classic musicals such as “Chicago” to more contemporary plays, such as May’s production of “Legally Blonde.”

This year’s opening production of Monty Python’s “Spamalot” featured a cast of 35 actors from around the area. The cast and crew have been working hard since the end of June to put on the play.

Monty Python’s “Spamalot” is a musical comedy based on the 1975 film, “Monty Python and the Holy Grail,” which is a parody of the legend of King Arthur and the Knights of the Round Table. The play features many of the series running jokes such as the killer rabbits that threaten the knights, a chorus of dancing medieval ladies, and many more memorable moments from the British parody.

Anthony Ventura, a sophomore at Youngstown State University, made his Playhouse debut by playing the role of Lancelot.

“I’ve loved theatre for a long time,” Ventura said. “I haven’t had time to do productions since High School, but I’m so glad I found time do this production especially.”

Ventura also said that he loved performing on the Playhouse stage.

Lester Malizia, director of “Spamalot,” said that the play is fun for everyone, no matter what age.

“There are a lot of contemporary assets with Monty Python references as well,” Malizia said. “It’s really a lot of fun, the play really will be the best time of your life.”

“Spamalot” is not the first play Malizia has directed at the playhouse. He also directed the audience interactive musical, “The Mystery of Edwin Drood,” as well as last year’s production of contemporary musical “Avenue Q.”

Malizia said he was euphoric when he got the call to direct “Spamalot.”

“I’m really excited about having a chance to work on it,” he said. “Our cast is a terrific group or people and everyone works really well together.”

Malizia also said he is very fond of directing at the Playhouse as well as working with the areas surrounding actors and actresses.

“Everyone is just so terrific,” he said. “The Youngstown Playhouse really is a great program for the area.”

Ventura said that he hopes that everyone will get a chance to see the play before they close the curtain on the production this weekend.

“The play really is one of the funniest things to be conceived on a stage,” Ventura said. “I’m a huge Monty Python fan too, but even if you aren’t a fan it’s still a great time and I promise you’ll love it.”