With spring being right around the corner, the Youngstown State University men’s golf team will be looking to make some noise. YSU placed seventh out of eight teams in the Preseason Golf Poll just ahead of the University of Wisconsin-Green Bay.

“I think we are going to be a much better team in the spring than we were in the fall,” YSU head coach Tony Joy said. “When you lose three seniors, you have guys now that weren’t competing on a consistent basis. In the all, we sort of overcame that issue.” 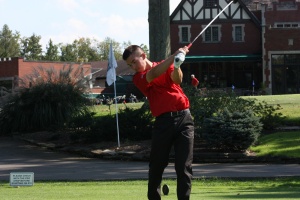 Joy said that he has been really positive about what he has seen coming into spring.

YSU played in its first tournament of the year in Athens, GA. The Southern Intercollegiate hosted 15 teams from around the country. YSU placed thirteenth out of the 15 teams. Steven Sveda led the way with a team-low 152 in two rounds.

“I’m going to use what I learned last year to try to be better this year,” Sveda said. “In the winter, the most important thing is conditioning. We try to change things up with our hit training.”

Sveda placed sixth at the Horizon League Championship last year. He said that he wants to be better than he was last year but wants his results to be team results.

“I’ve looked to improve everything,” Lydic said. “I haven’t focused on anything more than another. Probably my short game more than anything if there was something. I’ve looked more off the field with being a leader and helping the team.”

Lydic said that his goal every time he gets in the tee box is to get a round under 75. He also said that it is hard not to look ahead but they are ready for everything.

The Penguins will compete in four more tournaments before the Horizon League Championships from Apr. 23-25.

“I saw a lot of positives from the guys during that tournament,” Joy said about the Southern Intercollegiate. “It’s a big difference not having our three seniors from last year. It takes a while to get guys going. When you only count five guys, one score can make a big difference.”

Joy also said that he is starting to see both seniors, Lydic and Sveda, are taking the positions that they should be.

“I had a slow start,” Lydic said. “You always want to win but it is nice to get out there against good competition. We can build off that going forward to Virginia.”

YSU’s next tournament is the Kingsmill Intercollegiate in Williamsburg, VA.

“Indoors you can work on stuff but it’s limited,” Joy said. “Certain guys don’t have natural swings and need some outside time. Dom Carano is one of those guys that needs time to get himself together. He’ll be in the lineup at William & Mary.”

Joy also said that an issue during the season is students hitting the academic wall since no one is used to golfing and studying.

“We don’t compete as much between us two,” Sveda said. “I feel like the younger guys have improved a lot. Especially our juniors who have been doing really well. We try to make sure they don’t beat us but at the same time, we are a team. That’s what matters.”

YSU’s next tournament which is hosted by William & Mary College will test the Penguins and that is exactly what Joy wants for his team.