The audience experienced an intimate vibe at JD’s Summer Songfest on Aug. 25 outside of the Soap Gallery. The band line-up included Ken Block and Drew Copeland of Sister Hazel, The Vindys, Steve Everett, The Labra Brothers and JD Eicher and the Goodnights.

Block and Copeland of Sister Hazel, a group that won a Grammy and sold millions of records, headlined an acoustic show in downtown Youngstown. 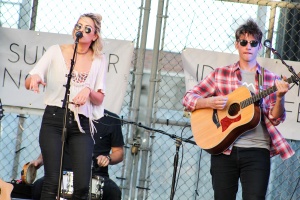 JD Eicher, a singer-songwriter and the event coordinator, set out with his band to create a family-friendly music festival.

Eicher said there are several great music events in the area, but not a songwriter and acoustic event.

“We fill a void,” he said. “It allows for an event that focuses on the storytelling side of music.”

Eicher said the goal of Songfest is for the audience to enjoy music and the personalities of the performer, rather than having a loud, shoulder-to-shoulder music festival.

He said he prepared for Songfest with his partner Michael McGiffin, the Youngstown events coordinator. The duo worked on logistical jobs the last couple weeks before the show.

David Labra, vocalist, guitarist and saxophonist in The Labra Brothers and junior electrical engineering major at Youngstown State University, said the band has participated in the Songfest for four years and it has been wonderful to see the event grow and develop.

“Playing in it from the beginning to now has been a really cool experience,” he said.

Labra said the energy keeps getting better at Songfest every year and has grown incredibly.

“The crowd that is brought to [the Songfest] is just so appreciative,” he said. “They’re very intent listeners, so they love every detail of the set, which is something you don’t really come by too often.”

The Labra Brothers are originally from the Youngstown area, and David said local people supporting his band is what it’s all about.

“I think [Eicher] has that kind of mindset too. He’s been a huge help to us,” Labra said.

Daniel Rauschenbach, co-owner of the Soap Gallery, said those who attended the event were exposed to Youngstown culture. 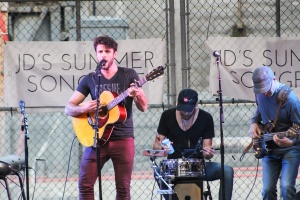 “I think Youngstown has so much to offer and so many different genres such as music, art, performance art,” Rauschenbach said.

He said he thinks having events like Songfest creates a yearly event that people look forward to.

Steve Everett, a musician from Nashville, Tenn., is friends with Eicher and helped him prepare for the event by promoting it. He said he’s familiar with how events like this one go.

“We made some graphics and shared those around,” Everett said. “We made silly graphics on the internet.”

The Soap Gallery remained open during Songfest and yard games took place beside the gallery, which added to the intimate feel of the concert.

“The Summit radio station is supporting the event as well as others,” Eicher said. “They help get the word out and spread the news about the event.”

Labra said it is important local businesses participate and sponsor local events like the Songfest because it brings a sense of community.