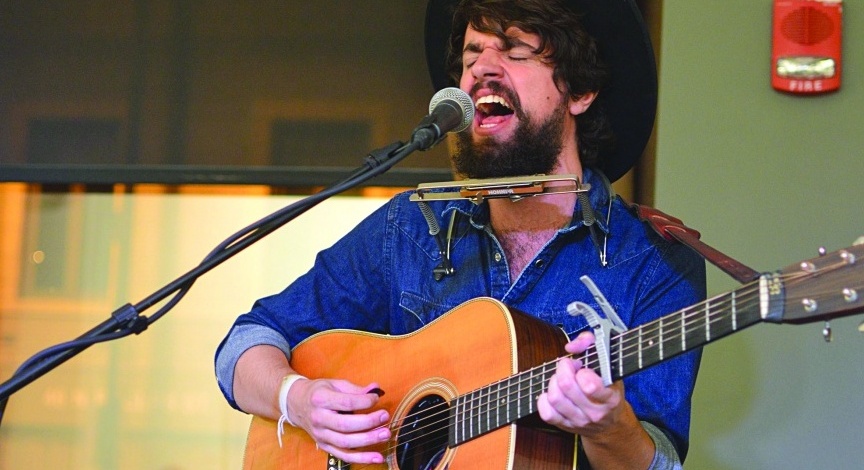 Armed with only a guitar, a harmonica and a flat brimmed hat, Anthony D’Amato performed quiet, fingerpicked songs to a receptive crowd.

The singer-songwriter performed a free solo set at the M Gallery in downtown Youngstown on Oct. 1.

He has shared the stage with acts like Bleachers and recently performed at the Americana Music Festival and Conference. The usual backing members of D’Amato’s band sat this performance out.

“Which will be good,” D’Amato said. “I was messing around in that space during sound check and it’s really reverb-y, echo-y and stuff. So it’ll be cool to just be solo, acoustic and just let stuff ring out.”

Concertgoers took their seats, lined the walls and sat on the steps as D’Amato picked at guitar strings, blew into the harmonica and sang.

His show was booked and organized by Penguin Productions, a Youngstown State University student organization.

“I want to do more college stuff,” D’Amato said. “I remember when I was in school I always wished there was more interesting stuff coming to campus. I like doing these shows because I end up meeting young kids that are active online. And they want to share it with their friends and bring other people out next time.”

Between songs, D’Amato gave anecdotes, one in particular about the flat-brimmed hat he wears while performing. D’Amato explained that he acquired the hat at South by Southwest Music Festival in Austin, Texas.

But the hat would not fit in his luggage, so the only place for it was on his head. He purchased a hot dog from a vendor, and the vendor told D’Amato to enjoy the rest of Rumspringa, the teenage coming-of-age ceremony in Amish communities.

After driving five and a half hours from New Jersey, D’Amato arrived in Youngstown — his first time here.

“Well, I’ve heard of [Youngstown] mostly because of the Springsteen song,” D’Amato said. “I knew of it because of the steel mills and everything. It’s known outside of Ohio, but I wasn’t sure what to expect.”

After his stop in Youngstown, he performed the proceeding days in Elmira, New York and Nazareth, Pennsylvania. After a short break, D’Amato and his bandmates will head to the east coast for another round of touring, performing with David Wax Museum. Following their east coast tour, the band will play dates with American singer-songwriter Israel Nash.

When asked about how he can spend so much time driving and not nod off — especially when driving by himself to solo gigs — D’Amato said he learned how to stay awake after hours on the road: hate listening.

“You put on just crazy conservative talk radio, and it just gets you so mad that you’re yelling at the radio. ‘That’s so stupid!’ And it keeps you focused, sharp and awake while you’re driving so you don’t drift off,” D’Amato said. “I just scan, and all of a sudden, as soon as you hear somebody that you recognize from Fox News talking. You can do it with pop radio too.”

D’Amato’s latest full-length release is “The Shipwreck From the Shore,” out from New West Records. D’Amato’s upcoming tour dates and previous releases can be found at www.anthonydamatomusic.com.

D’Amato’s performance marks the first formal event at the M Gallery since its grand opening. M Gallery is located on the ground floor of Erie Terminal Place at 112 West Commerce St., Youngstown.