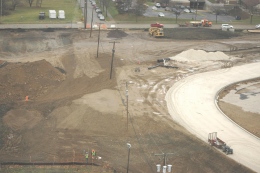 Construction continues on the new athletic facilities. To the left is the area being prepped for the softball field, and to the right is the soccer field and track. Photo by Cory Bartek/The Jambar.

Rich White, the associate director of planning and construction at YSU, said he’s pleased with the progress that is being made in constructing the new facilities. The project will likely be finished by summer.

“The contractor we hired is a very good contractor,” White said. “Everything seems to be moving pretty good except for the weather now; the weather has to hold up.”

Approximately $2.19 million is allocated for the project, White said.

“Then, what you do is back off the fees for the design consultant and a couple of miscellaneous things and then, yeah, it’s about 1.8 [to] 1.9 million for construction,” White said.

White admitted that the site’s utilities have set back progress.

“The one thing we would have liked to move along a lot quicker was the utilities,” White said. “If you looked at the site recently, you’ll still see telephone poles around the middle where the track is.”

The construction crew is now working to prep the site, and will continue working as long as the weather cooperates, White said.

“Should the weather get bad or start snowing, a lot of the stuff would be deferred until the spring because we’re kind of stuck,” White said.

Jamie Hall, assistant sports information director, said the softball team will play its 2013 season at McCune Park, which is located in Canfield. This diamond has been the home of the YSU softball team since the 2003 season.

However, Hall said he has high hopes that softball will transition to campus in time for the 2014 season.

Brian Campbell, head softball coach, said he is ecstatic since his team will soon have a home on campus.

“It’s going to be very exciting for the university and for the kids,” Campbell said. “It gives students the opportunity to stop and watch kids in between classes.”

Campbell said he believes that having a field on campus will be beneficial in several ways, including recruitment.

In addition, the idea of hosting a weekend tournament could become a possibility now that the university has a place to host one, he said.

“It would depend on the Horizon League schedule,” Campbell said. “Our season usually starts the week following spring break.”

In addition, members of the softball team are excited about the project — even though this year’s seniors won’t get a chance to use the facilities, he said.

“The girls are looking forward to having more of their friends come to watch games,” Campbell said. “Kids can come out on a nice day, lay a blanket down on the hill and enjoy a great game.”

YSU is also looking to add other amenities to the site, such as restrooms, concessions and storage.

“We’re kind of working on those things to see if we could find some funding and get those things in,” White said.