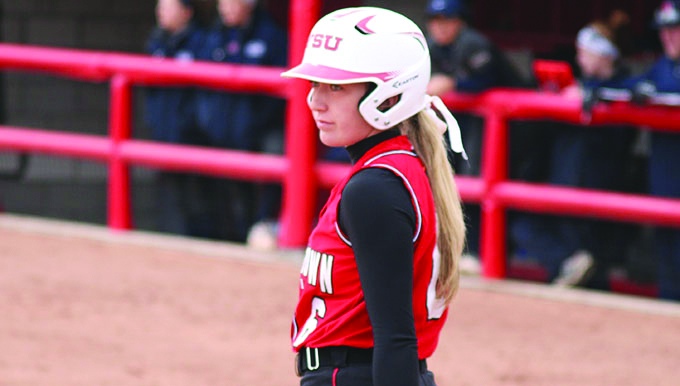 The Youngstown State University softball team will try to make up lost ground in the Horizon League standings this weekend.

The softball team was in first place in the conference as of April 1, but after losing four straight games — splitting a doubleheader against Oakland University and being swept by Wright State University — the Penguins find themselves sliding in the Horizon League standings.

YSU head coach Brian Campbell said Wright State’s pitching staff mixed their pitches well, but was impressed by the changes the team made offensively in the final game of the series.

“I think the pitcher, [Montana] Wear, did a good job keeping us off balance there,” Campbell said. “She pitched fairly well for the first two games and we came back in the third game and made the adjustments after the first day. It was nice for the kids to make the adjustments. [Kayla] Haslett came up with a big time grand slam and came into the game later on — we used all three pitchers that game.”

YSU will host Cleveland State University on April 10-11. The Vikings are entering the series with a record of 17-13 (2-4). Cleveland State has the best overall record in the conference, but has hit a rough patch — losing its last series against University of Wisconsin-Green Bay.

Cleveland State has the best offense in the Horizon League and one of the best batting averages in the country. The Vikings .311 team batting average ranks 61st out of 289 teams in the NCAA.

“We need to focus really hard this week on capitalizing on the things we do best — hitting and taking care of business on defense,” Penguins freshman Stevie Taylor said. “We just need to get back to the basics one step at a time. We need to focus on shutting the offense down on defense because we can’t give up unearned runs because that will never win us games.”

The Vikings pitching staff is just as formidable — first in ERA in the Horizon League and 71st in the country. Junior pitcher Susan Knight leads Cleveland State with 77.1 innings pitched and 2.55 ERA — leading the conference.

“We’ll do somewhat of the same approach that we did against Kent State [University],” Campbell said. “When Kent State came in here, they were top 54 in the country. [Kent State had] two really good pitchers — one underneath .89 and one around 1.00. We did a good job of shorting up our swings and making good contact there. After the game, the coach said that was the most hits they’ve had on them all year. That’s something we’ll look at going into this week, making adjustments as hitters shortening our swings and being selective along with that.”

Taylor said the team could rebound this week. She said the team has enough talent to make up the ground they lost in the Horizon League standings.

“I think that we need to look at it as one game at a time,” Taylor said. “Any given day, anyone could beat another team and we got a good group of girls. I think that with the numbers we could put up, we’ll be just fine in the conference.”