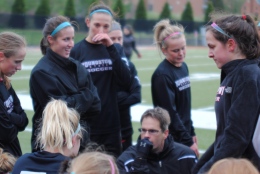 Head soccer coach Will Lemke directs his team during a spring scrimmage on Sunday at Stambaugh Stadium. The Penguins won, 3-0, before preparing for summer arrangements. Photo by Joe Catullo Jr./The Jambar.

The Youngstown State University soccer team participated in its third and final spring scrimmage on Sunday at Stambaugh Stadium.

YSU defeated Alderson-Broaddus College, 3-0, in a chilly environment, though head soccer coach Will Lemke said he cared less about the score and more about how his team faired heading into summer training.

“I think we got a little bit careless [toward the end] because we did have a lead,” Lemke said. “The one thing we have to emphasize is taking advantage of our opportunities. That’s something that killed us last year.”

The game-high temperature on Sunday reached 41 degrees. It dropped to the lower 30s by game’s end. If players on both sides were not on the field, they were running up and down the sidelines to stay warm.

“I was hoping it would be a little bit warmer, considering that it’s April,” junior Allison Ludwig said with a laugh.

Lemke, however, said he didn’t mind the cold.

“I was actually happy that we did have some bad weather because they have all summer to play in the warm weather,” he said. “I think we handled the weather [and] the conditions well, and we kind of hit on some of the major themes that we wanted to.”

Ludwig said that while the wintry conditions were tough to play in, it was a good experience and one the Penguins needed.

“We played well offensively, obviously, because of our 3-0 victory,” Ludwig said. “I think we passed really well up top, and our set pieces were better than they usually were.”

Lemke said Ludwig began and ended the game strong with a bit of down time in between.

“She missed some opportunities, but, at the end, she was really trying to think about what she was doing and tried to be thoughtful in her finishes,” Lemke said.

Throughout the game, sophomore Jade Flory said she saw the offense exploit the opponent’s defense.

“I loved our ball movement,” Flory said. “I thought we moved the ball really well. I thought we were creating a lot of opportunities.”

When Flory begins throwing, she flips 180 degrees with both hands on the ball as it presses against the ground and her head above it.

She then turns another 180 degrees on her feet and throws it.

“With me flipping it, I get more power behind it so that I can flip it harder and get it into the box,” Flory said. “It’s almost like a corner kick for us.”

The Penguins’ next focus is doing their homework before the season begins on Aug. 19 at Duquesne University. This includes reading plays in the notebook and participating in summer workouts.

The homework will last until the opener.

“I don’t know if I enjoy doing it, but it’s all part of the bigger goal,” Ludwig said. “It helps me get ready for the season, and I always think about the season when I’m doing it.”