Smith Hall will come down this summer as developers look to pursue phase two of the construction on University Edge student apartment complex. This will require the relocation of several departments.

Dan Kuzma, Youngstown State University recycling manager, is one of the people being displaced. He said he is thankful his office is small and easy to move.

“We had known since late summer or early fall that Smith Hall would be eventually torn down as part of a phase two project for extended housing and retail space,” Kuzma said. “In December, we knew a timeline of when this project would occur, which gave us time to prepare.” 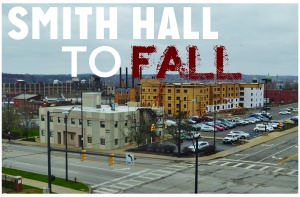 John Hyden, executive director of university facilities, said the YSU Board of Trustees approved phase two of the University Edge development along Fifth Avenue, where Smith Hall is located.

Provost Martin Abraham said the university is working to determine permanent locations for the departments currently housed within Smith Hall.

Parking Services will relocate to the previous location of Disability Services, across the intersection of Lincoln and Fifth Avenues from Smith Hall.

Hyden said this location makes a lot of sense because they have a lot of vehicles in and out throughout the day.

“There are somewhere around 60 students who work in the parking department who go in and out of the building for their assignments and shifts,” Hyden said. “We need a place where we can move them in and out, plus they have pretty good access to the vehicles.”

Regarding Disability Services’ move, Hyden said he is working with Justin Barker, who works at disability services, and Ashley Orr, president of the Student Government Association, to create a survey so people who use Disability Services can identify an optimal location.

Janitorial Services will find a temporary home in the basement of Cushwa Hall, in the space formerly occupied by WYSU.

“That will be a temporary move,” Abraham said. “I can’t tell you where the permanent location will be, but I think it’s likely we will see some space possibly freeing up on campus, so we can move Janitorial.”

One option is the out-of-business Craver Animal Hospital across Lincoln Avenue from Smith Hall. Hyden said they are discussing that possibility. Since the university outsources janitorial services, their needs are modest. Hyden said they just need a place to interview future employees and to store supplies.

The second phase of the University Edge development is expected to be operational by the fall of 2017. Hyden said construction will begin this summer. In addition to the retail space along Fifth Avenue, more housing will be constructed along Lincoln Avenue.

“Basically it will sort of mimic what they’re putting up right now but with more units,” Hyden said.