I sat down with Stephanie Smith, the acting co-director of the School of Performing Arts, to talk about the theatre department’s upcoming season. For the full interview, check out JambarTV Friday at noon.

How did the theatre department decide to move forward with the fall season?

Well, the season that we produce is a co-curricular season, so it’s really important for all of our curricular needs that our students get to perform. So we really, it was never a thought that we wouldn’t have a season, but we had to do a lot of research to figure out how we could make that season happen. One of the things you have to keep in mind is that [for] our productions, we have to get licensing rights to put these productions on. Normally they’re on stage. So we had the added complication of finding a platform that we could use so that we can deliver content … That’s going to allow us to film our productions, and then we do a lot of editing in post-production. Then we’re going to be able to upload that and people can watch the shows from the comfort of their own homes, right in watch parties or individually. This is going to allow us to move forward, giving the students the performance opportunities, and also through the filming process. It’s going to allow them to have those experiences with individual takes to say [lines], adjust the way that they go about the scene, then think about it, then go back and take another take. That’s actually part of the pedagogic experience that they get in a normal stage production from weekend one to weekend two, when they have all of the middle part of the week they can think about what they’ve done, make adjustments.

So what is the newest upcoming show?

So the first show in the fall season is “The Glass Menagerie.” It’s a well-known play by Tennessee Williams; it is somewhat autobiographical, and it’s often described as a memory play. And so that has a small ensemble cast for individuals, so it kind of worked well that that was already planned. We were going to be doing that on the stage, and then in March, when we all went home, we realized, wow, we were sort of lucky that we chose something with a small ensemble cast so we can continue to move forward with it.

It’s great that they continue to have those experiences and get to learn and participate. So there are a couple more shows that’ll finish out the fall semester, right?

“The Glass Menagerie” opens [Sept. 25], and then on Nov. 13, we have  “Elegies: A Song Cycle.” That’s a really interesting piece by William Finn. He is a Tony Award-winning composer and lyricist, and those songs, as the title suggests, they are songs about memory and loss, and so kind of fits somehow somehow into what’s going on in the world right now. That’s our musical, and it’s going to be really beautiful. We have some exciting guest performers that are going to be involved in that project as well. On Dec. 4, we have “Chillin’ in a Winter Wonderland: An Evening of Seasonal Jazz and Pop Tunes.” That’s our fall cabaret, and that one, we’re making available on YouTube. That one’s going to be free of charge. That’s a really popular event; we do two cabarets a year. So that’s pretty exciting. On [Dec. 6] we have our really popular “Ten Minute Plays,” and that will also be made available free of charge on YouTube. 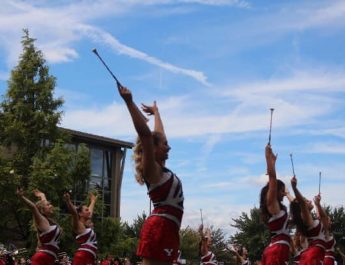