Bart Ehrman, professor at the University of North Carolina, delivered a lecture entitled “Misquoting Jesus: Scribes Who Changed the Scriptures and Readers Who May Never Know” at Youngstown State University last week.

The event was presented by the department of philosophy and religious studies as part of the Thomas and Albert Shipka Speaker Series.

Ehrman said people should be skeptical of what they read in the New Testament of the Bible. He argued that the text is inaccurate because the original words have been lost in translation. 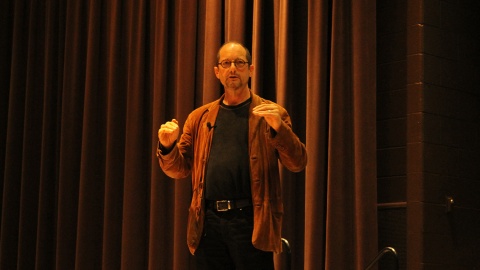 The Gospel of Mark, Ehrman said, was originally written in Greek, while Jesus spoke Aramaic. He expressed concern that the meaning of Jesus’s words could have been altered. He also pointed out that the book was written 40 years after Jesus is believed to have died and doubted the accuracy of the author’s memory.

He also raised concerns about the early life of the book; Ehrman said early copies of the Bible were handwritten — if errors were made in one manuscript, they would be passed onto the next.

Ehrman showed the audience a page from a copy of the book of Mark dating from 220 C.E. The page, which was dotted with holes, is one of the better-preserved pages of the manuscript.

“The only way you would know how many mistakes there are is if you had the original to compare this copy to,” he said. “But we don’t have the original; what we have is this. You can see there’s a problem here about knowing what was in the original New Testament.”

He said there are no originals with which to compare existing copies.

An English theologian named John Mill examined 100 manuscripts when publishing an edition of the Greek New Testament in 1701. Ehrman said he found 30,000 differences. He said this supports his arguments that the texts are unreliable, while noting that the majority of differences were minor.

“The good news is that the vast majority of those differences are unimportant, insignificant, immaterial and matter for nothing more than to show that scribes in the ancient world could spell no better than students can today,” he said.

“Many people are more committed to the Bible than they are knowledgeable about the Bible,” Ehrman said.

He pointed to the story about Jesus saving a woman from being stoned, asking the person who hasn’t sinned to cast the first stone. He said this was added to the original text of the Bible.

“Is the text of the New Testament reliable?” Ehrman said. “We can’t be 100 percent certain.”

“The reality is, we can’t know every word that is written,” Ehrman said.